Homepage » AFRICA: The continent is tackling the tide of waste that fouls the environment
This article is part of the dossier
AFRICA : WORLD ENVIRONMENT DAY 2021

AFRICA: The continent is tackling the tide of waste that fouls the environment 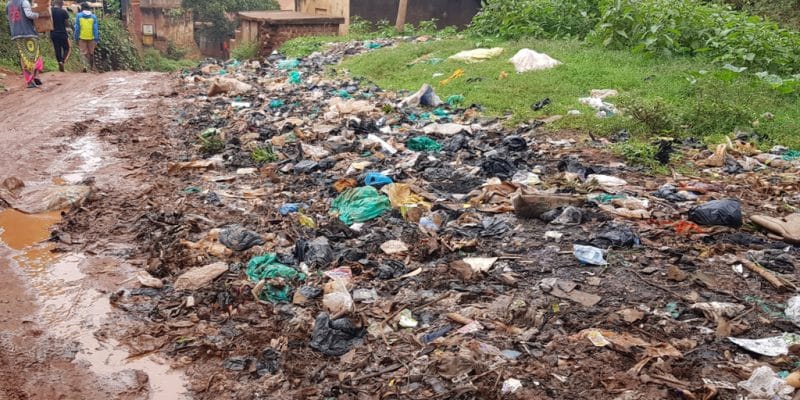 Waste has become a real nuisance for the environment. Whether it is solid or liquid, this waste contributes to the destruction of ecosystems everywhere and puts lives at risk. The urgent need today is for sustainable and integrated waste management to clean up the continent.

In Africa, the environment is receiving more and more waste every day, due to increasing local production and uncontrolled imports, especially since Asia’s doors are closing one by one to imported waste. The World Bank’s 2018 report “What a waste“ predicts a threefold increase in waste production in sub-Saharan Africa by 2050. Already, household, organic, plastic, electronic, medical and industrial waste, however hazardous, is being dumped in an uncontrolled manner in the wild. Unauthorised dumps are springing up everywhere, including in the middle of urban centres, disfiguring cities, polluting water and soil and bringing disease. Elsewhere, such as in Ethiopia, Congo, Burkina Faso, Mozambique, Mali and Niger, even developed landfills are also overflowing with rubbish.

One of the most environmentally damaging scourges is plastic. According to the international NGO Greenpeace, 99% of plastics are made from fossil fuels, which emit carbon dioxide (CO2). These plastics, once used, litter the streets of the African continent and, downstream, the seas and oceans. Plastic waste, “mainly single-use plastics”, also contributes to global warming, as it emits greenhouse gases such as methane or ethylene, as revealed by a study published in 2018 in the scientific journal Plos One. 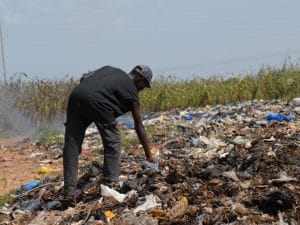 A man burning waste at a dump© africa924/Shutterstock

Even though 34 out of 54 African countries have passed a law banning single-use plastic bags, the urban landscape continues to be polluted almost everywhere on the continent by this waste consisting mostly of disposable bags, packaging, and water sachets. This situation is also caused by the illegal waste trade that is growing on the continent. Just a few weeks ago, the German company Hapag-Lloyd tried to bring 25 tonnes of plastic waste into Senegal, even though the West African country already produces 200,000 tonnes of plastic waste per year.

While some people are still wondering how best to manage this waste in Africa, for environmentalists the solution lies in the material itself. One of the solutions advocated to reduce the proliferation of plastic waste, which pollutes the land and the oceans, lies in the massive development of recycling. Many projects are being developed on the continent, including the “ReflexNG” project, which aims to collect and recycle plastic waste in Lagos, Nigeria.

In Benin, a large amount of plastic waste is transformed into cheaper, lighter and more environmentally friendly construction materials such as bricks and tiles. This is the case in Sèmè-Kpodji, a town in south-eastern Benin, where a plastic waste sorting and transformation plant will soon be built. The United Nations Children’s Fund (UNICEF) is supporting the project.

In neighbouring Togo, Franco-Togolese Edem d’Almeida, whose company Africa Global Recycling has been in existence for nearly nine years, recycles more than 40 different materials from the waste of the capital, Lomé.

The practice of recycling is also becoming widespread in other African countries, notably in Egypt, where eight private companies have joined forces around a charter for plastic recycling. The ultimate goal is to develop a circular economy around plastics. Among these companies is PepsiCo Egypt, which recently launched its “Recycle for the Future” platform. It will help improve recycling in the North African country. Nestlé Egypt also took part in the signing of the new charter. The subsidiary of Swiss multinational Nestlé launched an initiative in October 2020 that will result in the creation of a digital platform. The application will track recycling activities in Egypt. Nestlé wants to make 100% of its plastic packaging recyclable or reusable by 2025.

Another major plague in Africa, right after plastic, is electronic waste. According to the Global E-waste Monitor 2020, published in July 2020 by the Global E-waste Statistics Partnership, only 13 of the 43 African countries surveyed have a national policy for the regulation and management of waste electrical and electronic equipment (WEEE), even though the continent generated nearly 2.9 million tonnes of it in 2019.

At the end of May 2021, the Ghanaian government launched the African Environmental Health and Pollution Management Programme (AEHPMP) to combat mercury pollution and e-waste. An e-waste collection and sorting centre will also come into operation in Ghana in June 2021.

Other countries are also making efforts to recycle e-waste in Africa, notably Zambia, where the Zambian subsidiary of the Indian telecom group Airtel will rely on the expertise of Swedish electronics company Ericsson to collect and recycle e-waste sustainably. But what about other types of waste?

Organic waste is transformed into fertiliser and also converted into electricity, as will soon be the case in the Kloto plant in the Plateaux region of Togo. The biogas waste-to-energy project is being implemented by Biothermica Technologies, a company based in Montreal, Canada, at a cost of 250 million CFA francs (more than ‘381,000). Electricity can also be generated from waste incineration. 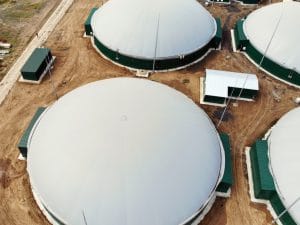 In Ghana, McDavid Green Solutions (MDGS), a company based in Florida, USA, will incinerate waste to generate electricity in Dawa, Greater Accra. Jospong Group of Companies (JGC), a partner of the Ghanaian government, is funding the project to the tune of $70 million.

A similar project is being implemented in Mali by Energy Solution Systèmes. Led by the Bamako City Council, the solid waste-to-energy project will initially inject 40 MW of electricity into the grid of the state-owned company Énergie du Mali (EDM). The Malian capital Bamako alone produces around 17,000 tonnes of plastic waste each year.

To improve its electricity supply, South Africa is also banking on plants for the energy recovery of plastic waste using pyrolysis technology. Led by Kibo Energy, in partnership with the South African company Industrial Green Solutions (IGES), the project aims to produce more than 50 MW of electricity that will be sold to industrialists, strengthening their autonomy vis-à-vis the South African state-owned company Eskom, whose over-indebtedness is a concern.

The solid waste circuit, from collection to treatment, is often tortuous in most African countries. In order to facilitate the work of waste management companies, young entrepreneurs are developing different types of applications. In Tunisia, the “Houmati” solution from the start-up 2BK Innovation allows companies to communicate directly with each Tunisian and to report on waste collection schedules. The “CleanApp Ghana“ application in Ghana offers the same functionality.

In some countries, awareness-raising is more targeted, such as in Egypt, where the “Vatrina“ application encourages people and companies to reduce waste related to the local fashion sector and to gradually migrate towards “sustainable fashion”. Launched by a group of Egyptian students, “Vatrina” offers three sustainable options, including redesigning customers’ clothes, selling second-hand clothes and donations.

The Beninese foundation Gnidéhoué also wants to optimise the responsible management of household and electronic waste in Benin. In April 2021, the foundation launched an innovation competition called “Ecolo4Dev“. The first three teams will receive technical support for the implementation of their solutions.

While it is true that Africa is making progress in environmental protection, the continent will not be able to go very far without a radical change in the mentalities of the populations and industries, which are the biggest polluters.

Industrial pollution in Africa also occurs through wastewater. In Mozambique, the gold mining companies Clean Tech Mining and Gem Resources in Manica have been suspended by the local authorities for dumping large quantities of polluted sludge into the Rovué River. The river flows into the reservoir of the Chicamba Dam, which provides water and electricity to Manica province. With these two cases, the total number of mining companies whose activities have been suspended for environmental damage in Manica since 2017 has risen to six.

Read Also – AFRICA: water, at the heart of the continent’s environmental challenge

Shell is also responsible for pollution in Africa, including in the villages of Goi, Ikot Ada Udo and Oruma in the Niger Delta, southwestern Nigeria. The Anglo-Dutch oil company was convicted on appeal by the Dutch courts.

On November 30th, 2020, in another case, the Nigerian courts upheld Shell’s conviction in 2010, half a century after an oil spill that hit River State hard. The Nigerian subsidiary of the Anglo-Dutch company should pay up to 400 million dollars in compensation for the Ejama-Ebubu community, the main victim of the ecological disaster. 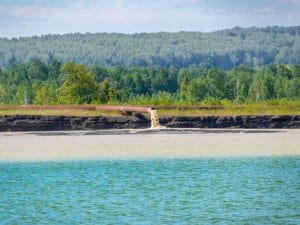 These environmental scandals, which are multiplying in the context of the exploitation of fossil fuels and minerals in Africa, are at the origin of the destruction of water resources, the living environment of animals. Little by little, industrialists are coming up against the strengthening of legal constraints on both sides of the Mediterranean, in Africa and in Europe,

Nevertheless, in Africa, very few industries are still thinking of reusing their waste, as is the case in the port of Tema, 25 km east of the Ghanaian capital Accra. In February 2021, Marine Bunkers Limited (MBL), a provider of shipping, trading and logistics services in West Africa, acquired Ecoslops’ industrial unit, called “Mini-P2R”. This unit will reduce illegal dumping (sea or land) from the port of Tema, thus contributing to the preservation of the resource. “Mini-P2R will also reduce greenhouse gas (GHG) emissions per tonne of fuel produced by a factor of three, unlike a conventional oil production cycle.

While waiting for a collective awareness to reduce discharges, it is advisable to treat wastewater better. This is effective in North Africa, where treated household wastewater is increasingly reused in agriculture, contributing to socio-economic and environmental development. The reuse of treated wastewater also limits the extraction of natural resources. 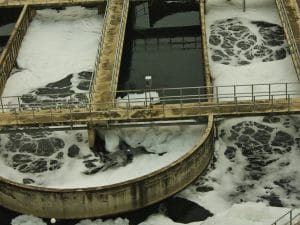 Countries such as Ghana, Kenya, Nigeria, South Africa and Angola are gradually following suit in terms of wastewater treatment. This is necessary to avoid the extreme fragility of ecosystems.