Homepage » AFRICA: water, at the heart of the continent’s environmental challenges
This article is part of the dossier
AFRICA : WORLD ENVIRONMENT DAY 2021

AFRICA: water, at the heart of the continent’s environmental challenges 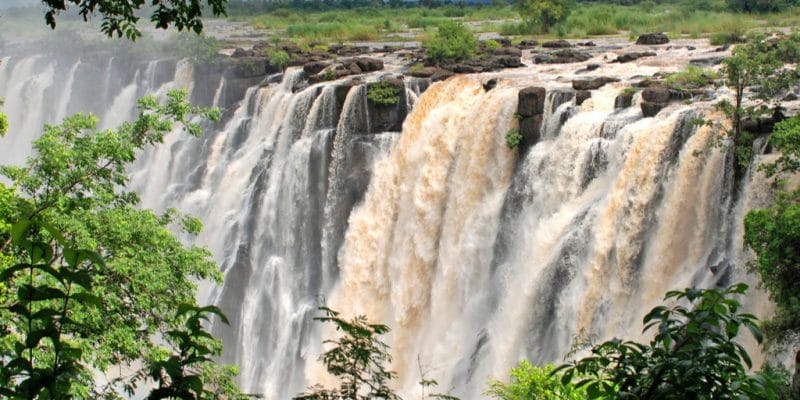 Water is essential to the balance of the environment. As a liquid, it contributes to the formation of landforms and the emergence of life (plant, animal and human), and remains essential for its maintenance. As a gas, water forms a screen in the atmosphere and protects the biosphere from solar ultraviolet radiation. Unfortunately, in Africa, this resource is unevenly distributed and degraded due to a lack of sustainable and integrated management. This is compounded by persistent water stress caused by climate change.

The environment is full of different water resources. Surface water includes all running or stagnant water bodies in direct contact with the atmosphere. This includes rivers and lakes. According to statistics published in 2019 by the African Water Association (AfWA), three lakes in Africa account for 30% of the world’s freshwater reserves. Lake Tanganyika in Tanzania covers an area of 32,900 km²; Lake Victoria with 68,100 km² at the intersection of Uganda, Kenya and Tanzania; and Lake Malawi which covers 29,500 km². Its shores are shared by Malawi, Mozambique and Tanzania. These water reserves are havens for local fauna and flora, and eventually evaporate or run off into the groundwater, thus recharging the water table.

Unlike surface water, groundwater is invisible to the naked eye. A large part of these freshwater reserves is located at a depth of more than 50 metres, particularly in the Saharan areas. They are stored in natural reservoirs called aquifers. According to the AfWA, the African continent has 660,000 km3 of groundwater, an invaluable supply of drinking water for humanity. According to the United Nations (UN), only 4% of Africa’s water reserves are exploited, and the lack of sanitation infrastructure causes losses estimated at some $28.4 billion per year, or nearly 5% of the continent’s gross domestic product (GDP).

Finally, there are the seas and oceans. According to the United Nations Environment Programme (UNEP), they cover more than 70% of the Earth’s surface. Seas and oceans provide food, regulate the climate and generate most of the oxygen we breathe. These vast bodies of water are also the foundation of much of the world’s economy, supporting sectors ranging from tourism to fishing to international shipping.

While the environment provides enormous quantities of water, it is also under pressure from both human and climatic causes: pollution from waste and effluents, extreme droughts, floods and flooding, deforestation and wetland destruction.

When waste degrades the quality of water resources

In Africa, marine pollution is reaching alarming proportions. One of the causes of this phenomenon is the uncontrolled disposal of solid waste (such as plastic, household, electronic, organic, medical, faecal sludge, etc.). In Tunisia, for example, plastic pollution led to the suspension of 23 beaches in 2020. This type of waste is also responsible for the destruction of aquatic biodiversity. The other source of water pollution on the continent is wastewater. These effluents from households and industries alter the quality of the water, making it unfit for human consumption and degrading the biodiversity that evolves there. 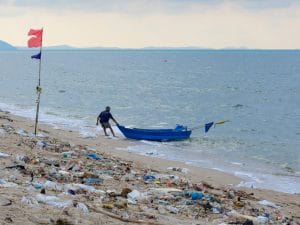 A beach polluted by waste©Golf_chalermchai/Shutterstock

In Tunisia, Lake Bizerte, located at the northern tip of Tunisia, has been polluted for many years by the steel company El Fouleedh, the Tunisian Company of Refining Industries (Stir) and the company Les Ciments de Bizerte. The Salt Lake, which covers an area of 120 km2, received huge quantities of heavily polluted industrial effluents which gave it a reddish colour. Since 2016, a project to clean up the lake, which connects to the Mediterranean, has been underway and will be completed by 2023.

In central Zambia, the Nchanga copper mine operated by Vedanta and its local subsidiary Konkola Copper Mines (KCM) spills sulphuric acid and other toxic waste that not only affects rivers but also permeates groundwater. The pollution phenomenon also affects the main sources of income for the population, which are agriculture and fishing. In 2015, more than 2,500 Zambians filed a lawsuit against London-based Vedanta and won their case in 2021. Unfortunately, this compensation only mitigates a problem that will ultimately cause irreparable damage to the environment and people’s health.

There is also the Franco-British oil company Perenco, whose oil flows into the waterways of Étimboué, a peninsula of about 5,700 souls in western Gabon. Perenco extracts 95,000 barrels of oil per day from the area, through antiquated facilities that are causing the leaks. This oil spill has led to the disappearance and desertion of a large part of the fish population.

Cases of pollution such as those mentioned above are legion in Africa. But various initiatives to preserve the various water resources are gradually being put in place, such as the GloLitter Partnerships (GLP) programme, which supports African countries in the fight against ocean pollution by plastic waste. The programme is implemented by the Food and Agriculture Organisation (FAO) and the International Maritime Organisation (IMO). 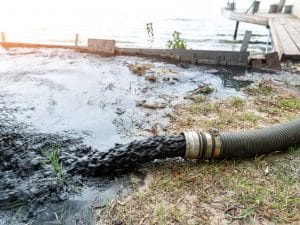 Pollution of a river by industrial waste©Golf_chalermchai/Shutterstock

Other examples include the African Environmental Health and Pollution Management Programme (AEHPMP) recently launched in Ghana to reduce water and soil pollution from mercury and e-waste, and wastewater reuse projects being developed across much of the continent, mainly in North Africa. Treated wastewater is returned to nature, or used for irrigation. In some rare cases, such as in Namibia, the effluent is even recycled into drinking water.

In Africa, the water crisis is also caused by drought. This phenomenon, which has been severely aggravated locally by climate change, is the cause of water stress, which mainly affects arid areas. This rapid decrease in water resources mainly affects agricultural production, the livestock sector and the supply of drinking water.

Strategies to cope with water stress

To improve water supply, governments are turning to alternative solutions. In addition to the reuse of treated wastewater, desalination of brackish water and seawater is a way to cope with water stress caused by climate change. In Egypt, at least 14 seawater desalination plants are expected to be commissioned by 2022. The reverse osmosis plants, which will have an overall capacity of 476,000 m3 per day, are being built in the governorates of Marsa Matrouh, Red Sea, North Sinai, South Sinai, Port Said, Daqahliya, Suez and Alexandria. The new facilities will bring the number of desalination plants in operation in Egypt to 90, with a production capacity of 1.3 million m3 per day.

The Egyptian government expects to have a production capacity of 6.3 million m3 per day by 2050. For the next five years, Cairo wants to build 47 reverse osmosis plants with an investment of 2.8 billion dollars. 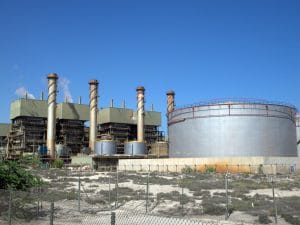 In South Africa, Coega Development Corporation (CDC) will build a seawater desalination plant. The facility, to be located in the Nelson Mandela Bay municipality, will have a capacity of 15,000 m3 per day. In addition to supplying Nelson Mandela Bay with drinking water, the future plant should boost the economy of this city of 1.25 million inhabitants, which is plagued by drought.

In addition to desalination, Morocco is considering the construction of dams as a response to its water stress, which ranges from 1,000 to 1,700 m3 of available fresh water per year per inhabitant. This could improve water storage, although it raises questions of use and does not solve the resource issue.

However, the programme also foresees the preservation of the resource and the increase of water supply in rural areas. Emergency measures also include the irrigation of 510,000 hectares of plantations. The initiative is expected to benefit 160,000 farmers. Traditional irrigation systems will be renovated and upgraded with drip irrigation, for example, which combines yield efficiency and intelligent resource conservation, but often leads to a rebound effect. The new emergency drought programme in Morocco will run from 2020 to 2027 at a total cost of US$12 billion.

The ultimate goal is to restore water ecosystems that are currently degraded.