Homepage » AFRICA: the urgent need to restore degraded ecosystems
This article is part of the dossier
AFRICA : WORLD ENVIRONMENT DAY 2021 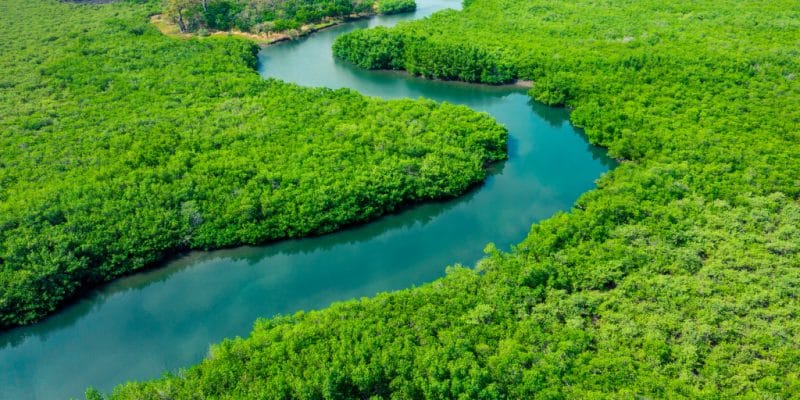 As the whole world celebrates Environment Day on June 5th, 2021, under the theme of "restoring ecosystems", this 47th edition calls for a global awareness, particularly in Africa. On the continent, the degradation of ecosystems is accelerating, due to the pressure generated by human activities. This includes pollution by plastic waste and wastewater, as well as deforestation.

The ecosystem is a basic ecological unit made up of the environment (biotope) and all the organisms that live there (biocenosis). Africa has five main types of ecosystems: coastal environments, deserts and semi-deserts, mountain environments, savannah grasslands and forests. Each ecosystem is characterised by its own environment and climate, and the people who live there have adapted to its particular conditions and learned to use its own resources.

The coastal ecosystems are certainly the largest on the continent. Africa has three major coastlines, with the Mediterranean Sea to the north, the Atlantic Ocean to the west, and the Indian Ocean shaping the landscape of the east coast. According to the journal Geography, Africa’s coasts are made up of sand, soil or rock. “In general, the plants and animals on the west coast of Africa are less varied and fewer in number than those on the east coast. Africa’s coastal environments include coral reefs, lagoons, mangroves, salt marshes and seagrass beds,” says the scientific journal.

Mapping for a better understanding of African ecosystems

The long coral chains off the east coast of Africa have created sheltered warm-water environments in which many species of marine life can thrive. Fewer reefs are found on the west coast, where unprotected cliffs are battered by cold water and high waves. In contrast, all African coasts have lagoons and lagoons, shallow bodies of water separated from the sea by a coral reef or a strip of land, and river deltas, fan-shaped areas at the mouth of a river formed by deposits of mud and sand. 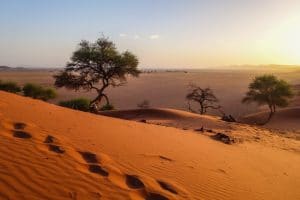 The Kalahari Desert covers an area of 900,000 km2 in southern Africa © Curioso Photography/Shutterstock

In contrast, the poorest ecosystems are the deserts, notably the Sahara in North Africa and the Namib and Kalahari in southern Africa. The most resource-rich terrestrial ecosystems are located in the Congo Basin, considered the second largest forest on the planet after the Amazon rainforest. According to the Central African Forest Commission (Comifac), the Congo Basin plays an important role in the continental climate system. These forests provide livelihoods for 60 million people living in or near them (food, medicine, fuel, fibre, non-timber forest products). They also fulfil social and cultural functions. The equatorial forest contributes to supplying resources (water, wood, proteins, etc.) to 40 million people living in urban centres close to these forest areas.

For Comifac, mapping is an essential means of improving knowledge of ecosystems with a view to their conservation. The state of the forests affects the well-being of millions of people, influences regional and global climate and biodiversity. “Accurate knowledge of forest area, floristic composition and dynamics provides information that is essential for the implementation and monitoring of environmental and economic policies,” explains Comifac.

These ecosystems are being degraded by human activities, particularly agriculture, which is reducing the forest cover in countries such as Ivory Coast and Ghana, which are world leaders in cocoa. Coffee, rubber and palm oil are also among the cash crops that are devastating the forests of sub-Saharan Africa. Ecosystems are also being degraded by industrial pollution and other mining activities, as well as extreme weather events such as drought and floods caused by climate change.

According to the United Nations Environment Programme (UNEP), every year the world loses 10 million hectares of forest, an area equivalent to the Republic of Benin (114,763 km²). In addition, soil erosion and other forms of degradation cost the global economy more than US$6 trillion per year in lost food production and other ecosystem services. According to the same source, ecosystem degradation is already affecting the well-being of at least 3.2 billion people, or 40% of the world’s population.

According to UNEP forecasts, about $10 trillion of global GDP (gross domestic product) could be lost by 2050 if ecosystem services continue to decline. At the same time, land degradation could reduce global food productivity by 12%, leading to food price increases of up to 30% by 2040. This is an incentive for policy makers and the private sector worldwide, and in Africa in particular, to find solutions to reverse the current trend.

Reforestation is one of the solutions proposed by the United Nations to halt the loss of forest cover in African countries. While in countries such as Ivory Coast, very few reforestation initiatives exist, several African countries are banking on reforestation to restore some of their lost forest cover. This is the case of Ethiopia, a country located on the Horn of Africa, a region known for its semi-arid and arid climate. A few weeks ago, Addis Ababa launched the third phase of the “Green Legacy” programme, which aims to plant 6 billion trees by 2022. This programme, one of the largest and most ambitious on the African continent, aims to plant 20 billion trees across Ethiopia. 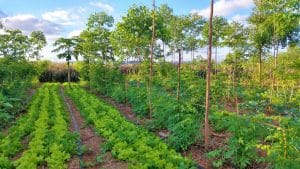 In West Africa, countries are farming while planting trees © Anacotrin/Shutterstock

UNEP also advocates agroforestry to reduce the impact of agricultural pressure on ecosystems. This method of using agricultural land in a complementary way, combining trees with crops or livestock, can be adapted to the cultivation of cocoa and rubber trees, products that are criticised by environmentalists for being produced in a quasi-industrial manner. According to UNEP, restoring forests and other watershed ecosystems could save water utilities in the world’s largest cities $890 million a year in water treatment costs.