Homepage » AFRICA: Climate resilience, the salvation of agriculture and tourism
This article is part of the dossier
COP26: AFRICA'S PLACE IN THE NEGOTIATIONS AT A TIME OF CLIMATE CHANGE

AFRICA: Climate resilience, the salvation of agriculture and tourism 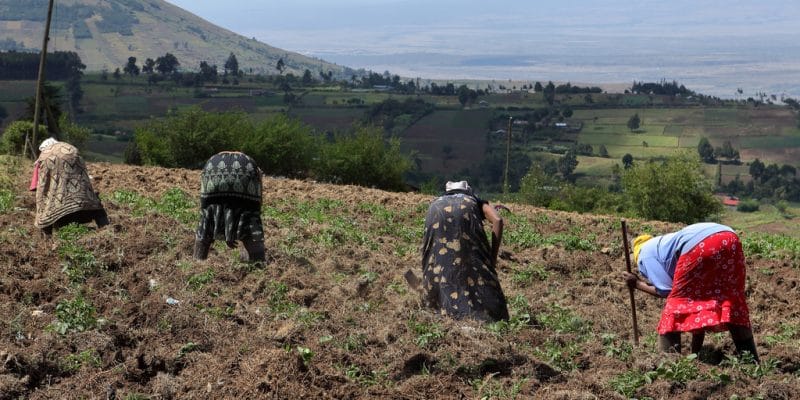 Climate change is having a major impact on economic and social development. At the forefront of this are at-risk sectors such as agriculture and tourism, where climate resilience initiatives are the most important. But it is a race against time, far from being won.

Agriculture and tourism are, in their own way, dependent on the natural capital they exploit. This relationship of dependence does not have only good sides. Currently, these two sectors are in a situation of great risk, due to climate change. The phenomenon is degrading the soil and drying up water resources, which are essential for good agricultural production. In addition, rising sea levels are weakening and destroying coastal areas, slowing down tourist activities and increasing unemployment in the territories.

Although Africa emits only 1.2 Gt of CO2, i.e. barely 4% of the world total, the continent remains the most exposed to the effects of climate change. And the situation is expected to worsen according to the climate forecasts published on August 9th, 2021 by the Intergovernmental Panel on Climate Change (IPCC). While waiting for the resolutions of the United Nations Conference of the Parties on Climate Change (COP26), which will be held from October 31st, to November 12th, 2021, African states, are multiplying adaptation strategies with the support of development partners. The objective is to strengthen food security and safeguard the tourism sector.

The Integrated Program for Development and Adaptation to Climate Change in the Niger Basin (Pidacc/BN) is one of the flagship climate resilience initiatives developed in Africa. The initiatives it supports will secure the agropastoral production systems of approximately 4 million smallholders, 51% of whom are women, in the nine countries of the Niger Basin. These countries are Benin, Burkina Faso, Ivory Coast, Guinea, Niger, Nigeria, Mali, Chad and Cameroon. The governments will also carry out soil restoration work. 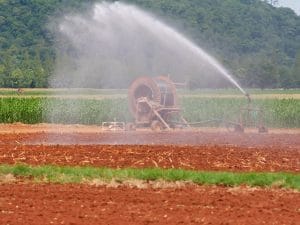 In Mali, the authorities have mobilized almost 14 billion CFA francs (more than 21 million euros) from the African Development Bank (AfDB), the West African Economic and Monetary Union (WAEMU), the African Water Facility (AWF) and the Infrastructure Consortium for Africa (ICA) for the implementation of the Pidacc/BN. In Chad, the program will cover the departments of Kabbia and Mont Illi in the Mayo Kebbi East region, as well as the departments of Mayo Dallah, Lake Léré, Mayo Binder and Mayo-Nanaye in the Mayo Kebbi West region. The Pidacc/BN is expected to last six years for an overall amount of 122 billion CFA francs, nearly 186 million euros.

The drought has also set Africa back two steps in terms of the resurgence of famine episodes, which are explained by the decline in agricultural production. According to the World Health Organization (WHO), 250 million people are undernourished in Africa, less than in Asia, which still leads the ranking with 381 million people, but more than in the Caribbean (48 million). To strengthen food security in countries affected by this scourge, governments are focusing on irrigation. The objective is also to reduce food imports. In 2017, Akinwumi Adesina, the president of the African Development Bank (AfDB) strongly denounced the current situation, which sees Africa spending $35 billion on food imports every year, as unacceptable.

Irrigated agriculture, a solution for countries with arid climates?

In 2018, the governments of six countries located in the Sahel region launched the $170 million Sahel Irrigation Initiative Regional Support Project (Pariis). The countries involved – Burkina Faso, Chad, Mali, Mauritania, Niger and Senegal – have taken out loans from the World Bank to finance this adaptation effort.

Pariis aims to “improve the capacity of stakeholders to develop and manage irrigation and increase the area under irrigation by following a regional approach based on solutions identified for 5 types of irrigation systems identified by the Dakar Declaration. These are lowland and controlled recession, small-scale individual private irrigation, community irrigation, large-scale public irrigation and irrigation through public-private partnerships (PPP). In all, 23,000 hectares of land will be developed and revitalized to increase production for 58,000 farmers in West and Central Africa by the end of 2024. Some 480,000 people will indirectly benefit from the Pariis project.

In southern Africa, governments are also stepping up initiatives to address the challenge of water resource management. Water stress is reaching unprecedented proportions in some countries in the sub region. This is the case in South Africa, where the government has recently been experimenting with the use of wastewater, a non-conventional water resource, to supply farmers. But here again, the initial investment cost is high. In August 2021, the South African government re-launched a wastewater treatment plant in Prieska, in the Northern Cape Province. The rehabilitation of the facility required an investment of $2.3 million. This process is far from unique to southern Africa.

Other sub-regions of the continent are also focusing on the development of non-conventional water resources in the face of water stress. North Africa, where the phenomenon is becoming more and more persistent, has the largest number of water treatment plants.

In the tourism sector too, climate change is gradually reducing all hopes and with them the promise of improving the economic balance of countries with a rich biodiversity and natural areas of breath-taking beauty. The World Bank indicates that tourism represents 8.9% of GDP in East Africa, 7.2% in North Africa, 5.6% in West Africa and 3.9% in Southern Africa. And only 1% in Central Africa. These figures support the argument that the continent is lagging behind and has a lot of room for improvement. Africa had recently begun to address the administrative, regulatory and infrastructure challenges to hope to one day reach the level of Europe (at the top of the ranking) with 672 million visitors in 2017, or 519 billion dollars captured before Asia (323 million visitors) and America with 112 million tourists the same year. But in 2021, following the global recession post COVID-19, Africa is far from having evolved much, on the contrary. For in addition to the consequences of the health and economic crisis, there are the long-term environmental impacts. 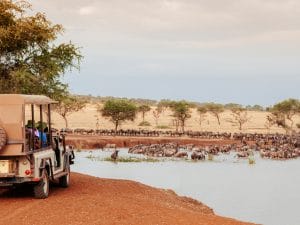 And these are many coastal areas that are currently in danger, because of the rise in sea level: intertidal areas (the foreshore, editor’s note), estuaries, salt marshes, mudflats, mangroves, eelgrass meadows (sea kelp, editor’s note), beaches, cliffs, shores and dunes. The main consequences of rising waters are floods that destroy everything in their path, including nature reserves, a jewel of biodiversity. With the disappearance of tourist areas, the sources of income and jobs for young people who are most in demand in this sector of activity are also disappearing.

In Senegal, for example, nearly 100,000 jobs will disappear if nothing is done. Beyond the jobs, this expected deterioration will cause the country to lose important financial resources. According to the National Agency for Statistics and Demography (ANSD), in 2017, tourism already accounted for nearly 6.7% of GDP, with the agricultural sector creating more than 30,000 direct and 70,000 indirect jobs.

The Climate Change and Integrated Coastal Zone Management Project (CCGIZC) is one of the initiatives implemented by the Senegalese government to preserve coastal areas. The second phase was launched in November 2020 in several coastal areas of Senegal, namely the Petite Côte, Casamance and the Saloum Delta. The latter is home to an important biodiversity composed of 114 species of fish that live and reproduce in the mangroves of the park. The latter attract up to 95 species of birds, including the royal terns that breed there. There are also lesser flamingos, grey pelicans and grey-headed gulls.

As part of this second phase of the ICZMCC, the Senegalese government is planning to plant trees to combat coastal erosion and to install dikes to prevent rising water levels. Breakwaters will also be built on some at-risk coastlines to protect anchorages in bad weather. The initiative is financially supported by the European Union (EU), valued at 5 million euros.

The economic risk linked to coastal erosion and the cost of prevention impact many West African countries where, according to the World Bank, nearly 3.8 million dollars are spent each year to combat the phenomenon. Particularly exposed, Benin loses an average of 4 meters of shoreline per year on 65% of its coastline. To fight against the phenomenon and promote tourism, the Beninese government will plant more than 500,000 plants consisting of four varieties of coconut and palm trees along the seaside areas. According to the Beninese Minister of Living Environment and Sustainable Development José Tonato, the Beninese state spends each year, more than 288 million CFA francs (about 440,000 euros) for the maintenance of the coastal strip, which as elsewhere also suffers the pressure of pollution by waste. Faced with this double impact, which is disastrous for local economies, environmentalists and governments are now working together to find a new form of tourism to revive the sector. This is ecotourism.

A winning investment in the end…

In Gabon, the project “African Ecotourism Safari” was launched on March 3rd, 2021. The initiative aims to conserve and build several eco-lodges in the Central African country’s national park network, thirteen in total. The Gabonese government estimates that the project will attract 100,000 visitors per year in the mid- to high-end range and generate 25 billion CFA francs, or about 38 million euros, by 2025. Gabonese authorities are working with Luxury Green Resorts, the joint venture owned by the Gabonese Strategic Investment Fund (FGIS) and Singaporean hotelier Amanresorts to implement the project.

Moving towards sustainable tourism is also the goal of the Congolese government, which in December 2020 obtained a loan of $14 million from the United States Agency for International Development (USAID) to do so. The Congolese authorities will enhance the natural areas and conserve the biodiversity of the Nouabalé-Ndoki Park in the north of the country, which is threatened by poaching and the installation of sawmills that exploit the reserve’s wood.

The paradigm shift of this new form of tourism: the activities are now primarily in the service of conservation or restoration of nature. Because man, at the origin of the accelerated disturbances concerning the natural balances, also has a great part to play in the preservation of the environment. Awareness programs exist to educate tourists to favour renewable energies over fossil fuels that emit CO2, to rationalize water consumption in the face of water stress, to eliminate waste sustainably, and to avoid deforestation that accelerates erosion. Eco-responsible” gestures that will perhaps contribute to slowing down the advance of the desert here and the waters elsewhere, which threaten to cover everything.