Homepage » COP26: what priorities for Africa in the face of climate change?
This article is part of the dossier
COP26: AFRICA'S PLACE IN THE NEGOTIATIONS AT A TIME OF CLIMATE CHANGE 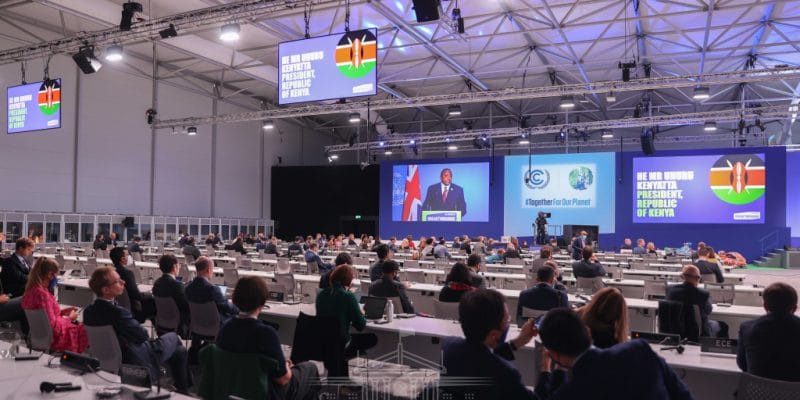 On the occasion of the 26th United Nations Conference of Parties on Climate Change (COP26), some twenty African heads of state and government travelled to Glasgow, Scotland. The objective was to demand that developed countries meet their financial commitments to developing countries, including Africa, and that a clear path be mapped out for the reduction of greenhouse gas emissions (GHG) that cause climate change.

The ballet of African heads of state at the podium of the United Nations Conference of Parties on Climate Change (COP26) has clearly defined the position of the continent vis-à-vis this global phenomenon. “We expect the detailed rules and procedures for implementing the Paris Agreement to be finalized and a clear pathway for climate change resilience to be mapped out. We also expect the needs and priorities of developing countries to be addressed,” said Uhuru Muigai Kenyatta, President of the Republic of Kenya on November 2nd, 2021. In 2020, only 79 billion dollars were mobilized by the biggest polluters to vulnerable countries, instead of the 100 billion dollars per year until 2025, as agreed at the COP15 in Paris, France. This finding was made in a report published in August 2020 by the Organization for Economic Cooperation and Development (OECD).

“Today it is almost certain that the countries of Africa, the Pacific, Latin and South America, and the Caribbean that need the most funding are not those who receive it,” regrets Emmanuel Macron, the French president. But for African leaders, speeches are no longer enough, especially since climate change is caused by industrialized nations that “pollute without reserve, unlike Africa, which emits only 1.2 Gt of CO2, barely 4% of the world total,” recalled Wavel Ramkalawan, President of the Republic of Seychelles at COP26.

In the Democratic Republic of Congo (DRC), for example, 30% of the world’s second largest rainforest is at risk due to logging. Small-scale agriculture is largely responsible for this situation, and to a lesser extent logging for fuel. The President of the Republic of the DRC, Félix-Antoine Tshisekedi Tshilombo, who spoke at COP26 plans to “increase the country’s nationally determined contribution (NDC) to 21% greenhouse gas (GHG) reduction by 2030, plant 1 billion trees by 2030, and expand the DRC’s energy mix by combining hydroelectricity, solar, biomass, etc.” 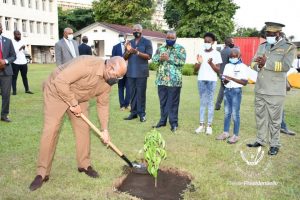 The DRC government has begun to implement this policy, but remains stumped on the financing that would allow it to achieve the expected goals.  However, this Central African country is helping to stabilize the global climate thanks to its forests. The DRC also participates in decarbonization in the transport sector thanks to its strategic minerals and could, according to Tosi Mpanu Mpanu, an expert in sustainable development and climate finance, and ambassador of the DRC to COP26, promote decarbonization on the entire African continent given its renewable potential (100,000 MW of hydroelectricity and 90,000 MW of solar and wind power). Like the DRC, several African countries took advantage of this major climate meeting to unveil their plans for the coming years.

Togo has chosen the year 2030 to reduce its GHG emissions by 30.06%. To achieve this goal, the country will need 2.6 billion dollars. This funding that the Togolese government hopes to find from development partners present at COP26 will be divided between energy, waste management and sustainable mobility projects. “More than 300 mini-grids with a total capacity of 9 MW will be installed in Togo, as well as solar kits (85 MW) to electrify 555,000 households by 2030,” announced Faure Gnassingbé, President of the Republic of Togo. In North Africa, Morocco also aims to reduce its GHG emissions by 45.5% by 2030.

In addition to these mitigation projects by country, more global objectives were announced by the African negotiators present at COP26, including the preservation of forests that are natural carbon sinks, the safeguarding of the oceans and the fight against desertification. The Great Green Wall project was particularly defended by the President of Mauritania, Mohamed Ould Ghazouani. “The African negotiators will then put together a common strategy at the level of the African Ministerial Commission on the Environment and then at the level of the Committee of Heads of State and Government on Climate (CAHOSCC),” explains the Congolese DR negotiator Tosi Mpanu Mpanu.

Financing in line with Africa’s needs

If African countries are negotiating for the effective mobilization of the 100 billion dollars per year promised by rich countries, the States hope that after 2025, the cost of climate financing for developing countries will be revised upwards based on a reassessment of needs.

The African Group of negotiators at COP26 estimates that between 750 and 1,300 billion dollars per year will be needed to finance climate action in developing countries. “We will try to push for this funding to be mobilized and we want it to be allocated in various forms, including highly concessional loans because we know that the private sector, unfortunately, if it gets involved, will come with conditions that are not very favorable for African countries which, for the most part, have to finance adaptation projects that have no logic in terms of return on investment,” explains Tosi Mpanu Mpanu, negotiator for the DRC at COP26. 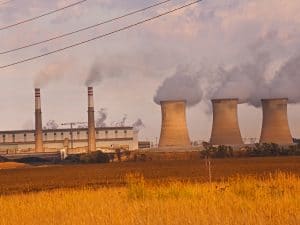 While waiting for global commitments, some countries have already received promises of funding. South Africa, the biggest polluter on the African continent, will receive 8.5 billion dollars to finance its energy transition. The pledge is made by the United States of America, the European Union (EU), the United Kingdom, France and Germany. The objective is to enable this southern African country to accelerate the closure of its coal-fired power plants and to open new power plants, but with renewable energy.

In Central Africa, a dozen countries (including the United States and the United Kingdom) and the Bezos Fund have announced a collective contribution of at least $1.5 billion in funding between 2021 and 2025 to support the efforts of the Congo Basin countries in implementing REDD+ (Reducing Emissions from Deforestation and Forest Degradation) activities. The goal is to protect and maintain the region’s forests, peatlands, and other essential carbon reserves for the planet. DRC President Felix Tshisekedi and British Prime Minister Boris Johnson also signed a 10-year (2021-31) funding program to protect the DRC’s forest, through changing traditional farming techniques that destroy the forest, and strengthening resilience measures for rural populations.

In addition to adaptation and access to finance, African negotiators at COP26 called for recognition of the special circumstances of the continent’s needs. “A point that was fiercely opposed by Latin American countries,” said Tosi Mpanu Mpanu in an interview with our colleagues at TV5 Monde. The climate ambassador of the DRC at COP26 added that a process has been put in place to see how to take into account, despite everything, this priority position of African countries.