Three main solutions exist to power sustainably those populations: grid extension, individual systems, and mini-grids. The economical choice between those solutions is mainly linked to the distance to the grid, to the density of the population and to the level of service.

Grid extension is the most classical answer but has several issues. It can be extremely expensive for remote communities and does not necessarily offer a good quality of service (case of “bad-grid”). In its latest “Africa Energy Outlook“, the IEA considers grid extension as the least-cost option only for 45% of the population.

Individual electricity generation systems like solar lamps or Solar Home Systems (SHS) can provide at a low cost a basic quality of service to regions with low population density. SHS manufacturers or distributors (e.g. BBOXX, Mobisol, Fenix International, Total, Schneider Electric…) have experienced significant growth in this market over the last years. However, those solutions usually power low-power appliances and are usually used as transition solutions.

Mini-grids, local and isolated networks, have started to gain momentum in the last 5 to 10 years. In cases where the population is dense enough, they can offer a similar quality of service than grid extension as well as a lower cost than Solar Home Systems. It could represent the least-cost option for 30% of the non-connected African population.

At Infinergia, we analyzed the industrial context globally but also the projects and regulatory framework focusing on 21 African countries (and 11 Asian ones) where mini-grids are already a thing or could be one soon.

What is a mini-grid exactly?

Mini-grids can be defined as one or several decentralized energy generation sources with a combined peak power between 10kW and 10MW connected to multiple customers through a local network. Those systems are completely isolated from the national grid. If they are not, we rather call such a system a micro-grid (more common in North America for instance). If the peak power is smaller (<10kW), we call it a nano-grid.

Most of those installations produce and distribute electricity at a community level (usually a village) but can also be used for commercial, industrial, military or agricultural applications.

They are not necessarily a clean source of energy. The first African mini-grids were often solely based on diesel. The drop in solar panel prices in the last ten years favored the development of solar-based mini-grids. Now, most recent installations are hybrid ones, using photovoltaic panels and batteries to have electricity at night but also are often connected to a back-up diesel generator to ensure a good quality of supply.

Main components of a mini-grid 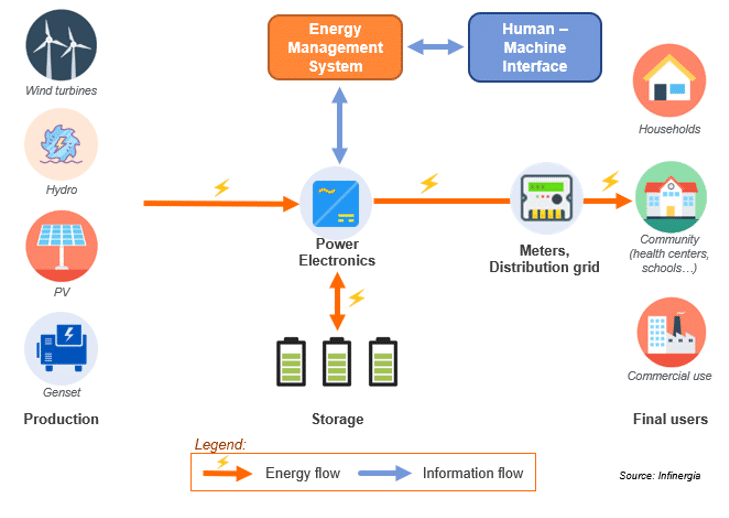 In Africa, over 1,000 installed solar mini-grids have been identified. Most of them are in Senegal, Cameroon, and Nigeria. Among those, around 190 (around 20%) have been commissioned in 2019.

Regarding future projects, we estimate that between 5,500 and 17,000 new solar mini-grids could be built by 2026. To estimate this number, we have gathered, over the last 5 years, various announcements, tenders, and other national or private targets that we have double-checked with field interviews. In this context, it would be very optimistic to consider that all those announcements will lead in the short term to commissioned projects. In order to characterize their level of certainty, we decided to distinguish three main categories:

A Regulatory Framework Strengthening in Most African Countries but Still Uneven

At Infinergia, we have also developed an indicator to compare the development stage of the mini-grid market over 30 countries globally. By analyzing the regulatory framework, the announced and existing projects, the countries’ economic status and the local presence of mini-grid actors, we can compare, year after year, those countries’ evolution.

However, historical mini-grid markets like Senegal or Madagascar are still active in terms of projects but face uncertainties in the governments’ willingness to develop them. Some key answers and associated funding are still necessary to reach the various officially announced objectives.

Technical failures are common in African harsh environments. For instance, only 25% to 35% of the mini-grids installed in Senegal between 1996 and 2011 still work today. Batteries, for instance, are a key component of solar-based mini-grids. They are both the most expensive component and the most vulnerable to external conditions. A hot environment can thus have a decisive impact on the battery’s life expectancy. This is especially true for Lead-acid batteries that represent to date the largest share of installations. Furthermore, using various power sources adds a complexity that must be managed by an Energy Management System or EMS that needs to be both efficient and resilient in order for the smart grid to be sustainable.

At the system’s level, there is today a lack of standardization is the building process of mini-grids. Most mini-grids today are custom-made. Once the project is financed and the community needs have been established, an Engineering Procurement, and Construction firm (EPC) is chosen to design the most relevant system. A specific room is then built to host the different components (inverter, batteries…). The local workforce assembles every component on-site. Those systems are difficult to duplicate and to capitalize on.

To tackle those issues, more and more project developers use containerized standardized solutions. Such products can all be assembled inside the same factory and just then need to be distributed and unfolded (for the panels) on site.

Those systems have various advantages:

However, it should be noted that technical failures can also be caused by long regulatory delays (e.g. decision for subsidies selling tariffs, customs…) and better systems will not answer all issues.

These technical solutions are an important step towards the development of mini-grids. Nevertheless, long installation delays and some mini-grid’s failures can be caused by regulatory delays or political choices (e.g. choice of the cheapest system at the expense of its longevity, customs’ delays during which batteries wear out…). Technological innovation must not hide the fact that the main brake on the development of this market is political and financial.

A strong future with short-term uncertainties

Even by taking only into account our realistic scenario, we can estimate that the mini-grid market should at least experience a 20% CAGR over the next 6 years globally. The growth of this market is not limited by its potential or by companies’ and countries’ willingness to develop those systems but rather by technical and financial issues. The business model for privately operated mini-grids has not been proven yet and most of the projects rely on national or international subsidies. They are therefore strongly impacted by political instability and international programs.

You wish to publish an article, you are an expert in your field...