Homepage » DRINKING WATER IN AFRICA: Self-sufficient solutions are needed in rural areas
This article is part of the dossier
WORLD WATER DAY 2021 : WATER AND SANITATION IN AFRICA 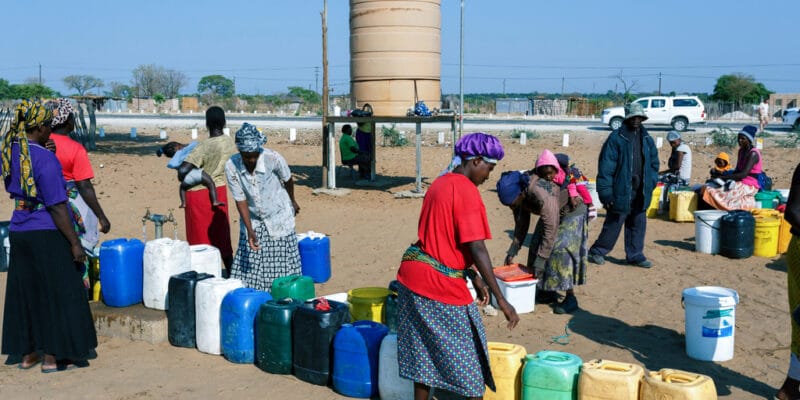 When it comes to access to drinking water in the African continent, rural areas are still lagging behind. Sub-Saharan Africa remains the region where the phenomenon is most worrying, with 400 million people without a safe source of drinking water, according to the World Bank. A large proportion of this population is in rural areas. To improve access in these areas, governments are increasingly turning to self-sustaining solutions.

Water shortages in rural areas in Africa may be caused by remoteness. Villages in these areas are usually far from national water networks, making it difficult (and expensive) to make connections. The lack of water is also due to the age of the equipment, which is also overused. Sub-Saharan Africa remains the region where water supply in rural areas is least developed and where the “urban-rural” imbalance is most pronounced. Of the 400 million people without a secure source of drinking water, according to the World Bank, a large proportion are in rural areas.

The challenge is enormous, as 80% of diseases in Africa are waterborne and climate change is making access even more difficult. In the meantime, governments south of the Sahara have become more aware of the issue, which has led to a reduction in this figure. Access to water in rural areas has improved thanks to various solutions advocated by governments in sub-Saharan Africa. Among them are drinking water supplies (AEP).

AEP at the heart of many water supply policies

Drinking water supply (AEP) refers to the set of facilities that enable the production and distribution of drinking water. In Africa, this type of facility is deployed by governments and private companies to provide drinking water to people in areas not connected to the national water network. In general, AEP is a borehole equipped with a mechanised pumping system, connected to a storage tank and a water distribution network (standpipes, etc.).

In Ivory Coast in particular, the government wants to guarantee access to drinking water for all Ivorians by 2030 through the “Water for All” programme, financed to the tune of CFAF 1,320 billion (around €2.1 billion). In this context, the National Drinking Water Office (ONEP) has taken delivery, in 2019, 36 drinking water supplies created for the benefit of populations living in semi-urban areas. The Ivorian Ministry of Hydraulics, which is piloting the programme, plans to build more water supply systems in Ivory Coast. In this West African country, current drinking water coverage is estimated at 82%.

A similar programme is being developed in Chad. It is the Drinking Water Supply and Sanitation Programme in Semi-urban and Rural Areas (PAEPA SU MR). It is being implemented in several phases in eleven regions of the Central African country via drinking water supply systems. The rate of access to drinking water in these regions varies between 5% and 42%. These are Borkou (19%), Ennedi (8%), Tibesti (5%), Mayo Kebbi Ouest (13%), Mayo Kebbi Est (22%), Tandjilé (31%), Logone Oriental (27%), Logone Occidental (16%), Mandoul (39%), Moyen Chari (42%), Salamat (40%) and Sila (27%).

In Mauritania, the government plans to install 70 water supply systems and 25 mini water supply systems as part of its drinking water and sanitation project in rural areas and small towns. In rural areas in the Gorgol, Guidimakha and Assaba regions, the sector project will also rehabilitate existing water systems. The 128 rehabilitated facilities will then be equipped with solar hybrid systems.

As noted above, AEP has several components. However, it is important to note that some of these components can, in specific cases, be the subject of a whole project.

Boreholes are one of the solutions advocated by governments in sub-Saharan Africa to alleviate rural water shortages. There are two types. Boreholes equipped with human-powered pumps and boreholes powered by electricity.

In Burkina Faso, the government is also implementing the Burkina Faso Regional Program (BFRP). The initiative led to the reactivation of 10 boreholes equipped with human-powered pumps in January 2021, as well as two large-diameter wells in the rural council of Tangaye, in the North region. 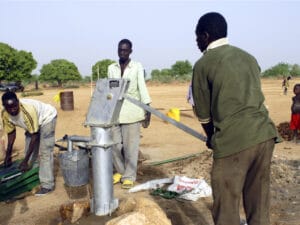 Also, in West Africa, notably in Togo, the government re-commissioned 30 boreholes equipped with human-powered pumps (serving, among others, 2 health units and 7 schools) and inaugurated 344 new boreholes built for 161 schools, 21 health units and 162 rural communities. These achievements are part of the School and Rural Health Improvement Project (Passco).

A similar project is underway in Zimbabwe, where the government has launched the construction of 600 boreholes in eight rural provinces in 2019. The new boreholes are equipped with human-powered pumps. Each province will have 60 boreholes, improving access to clean water.

In addition to the lack of drinking water, the countries of sub-Saharan Africa are also faced with the problem of power cuts. For this reason, governments are now focusing on alternative power sources such as boreholes equipped with solar-powered pumps. In Gambia, the authorities launched the fourth phase of the rural water supply project in August 2020. This part of the project will see the construction of 20 solar-powered boreholes. The installations are expected to provide drinking water to more than 50,000 people in rural areas of the West African country.

The projects mentioned are just one example of what is being done today by African governments to alleviate the lack of clean water in the territories. In some countries, these actions are supported by companies (local and private) or non-governmental organisations, notably through practical solutions such as containerised systems. 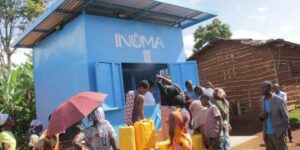 In Rwanda, this system has been tested since 2014 thanks to Christelle Kwizera. To date, the young Rwandan entrepreneur has installed 86 mini-grids in several urban and rural localities in the country. The water filtering devices (kiosks, filters and pumps) designed through her start-up Water Access Rwanda now provide more than 47,600 Rwandans with access to drinking water.

In Nigeria, the social enterprise Impact Water also installed these water treatment systems in at least 5,000 Nigerian schools and universities in 2018. These installations provide clean drinking water to 1.8 million youths in rural areas. Impact Water Nigeria is also active in East Africa, including Uganda and Kenya.

Ivory Coast has also made a major investment (600,649 euros) to improve the supply of drinking water to its population via compact degremont units (CDUs). At least 40 prefabricated water purification units, designed by the French group Suez, will be installed in 31 “secondary towns” in the West African country. The CDUs have a capacity of 100 m3/h. Modular and easy to use, they are used for the treatment of groundwater and surface water.

Over the years and with the persistence of climate change, the main cause of drought, the use of containerised systems has evolved. There is increasing talk of solar-powered brackish water desalination containerised systems. These systems are being used more in Eastern, Southern and Northern Africa where water stress is in full swing. In Somalia, for example, a containerised solar-powered water desalination system installed in late 2020 provides drinking water and fish farming for 7,000 people in a rural community in the Sool region.

This is the trend in rural water supply in Africa. Although things have changed since the year 2000, much remains to be done to guarantee the populations of these territories full and constant access to this fundamental right: water.