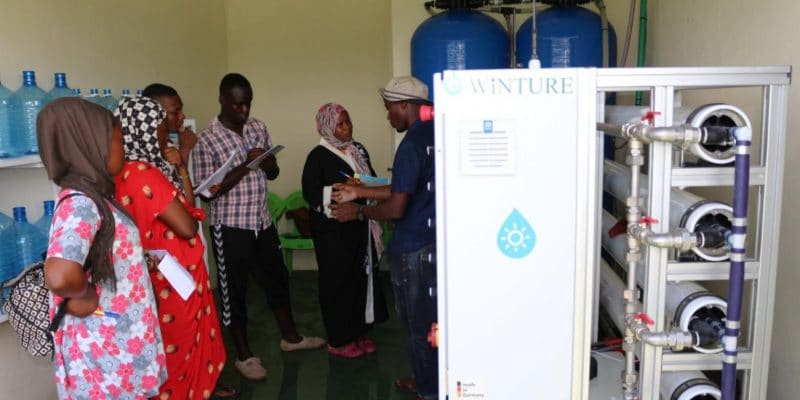 The German start-up Boreal Light has just completed the installation of a solar-powered water desalination system in Oog, a town in the Sool region of Somalia. The system provides drinking water and water for fish farming, which is necessary to supply 7,000 people.

The desalination system installed in Oog is the Winture Planet Cube from the German start-up Boreal Light. The new drinking water production plant is located in the Sool region of Somalia. The system is equipped with a borehole that pumps saline groundwater from Oog. The small plant powered by an integrated photovoltaic solar system is capable of supplying 1.5 m3 of water per hour to the population through a kiosk.

Part of the water is used for fish farming, including ponds that can hold 20,000 fish. A real feat in this region with a desert climate. Moreover, GreenTec Capital Partners, one of Boreal Light’s financial partners, estimates that its containerised system will be able to supply fish to 7,000 people in the surrounding villages.

Other desalination systems expected in the region

The water desalination system installed in the locality of Oog is financed by Oxfam. As part of its partnership with Boreal Light, the international organisation plans to install four other drinking water kiosks to supply the populations of the Sool region. GreenTec Capital Partners believes that these types of installations should relieve the populations of this part of Somalia.

“Only 52% of the region’s inhabitants have access to drinking water and the inhabitants are subjected to unscrupulous private water suppliers or forced to travel long distances to obtain surface water,” says the investment company based in Berlin, Germany. The start-up Boreal Light is thus making its contribution to access to drinking water in this country in the Horn of Africa.