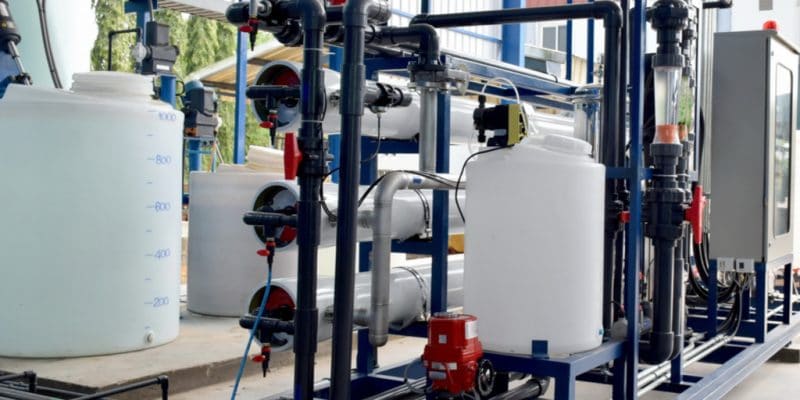 A containerised seawater desalination unit has recently been inaugurated at the University of Namibia (UNAM). It has been installed by Solar Water Solutions, a company based in Espoo, Finland.

Namibia may have found an off-grid solution to deal with the lack of fresh water… A desalination unit has thus been commissioned at the Sam Nujoma Campus of the University of Namibia, located in the town of Henties Bay, in the Erongo region. The project is entrusted to the university by the Namibian government. To achieve this, the university worked in partnership with the University of Turku in Finland.

The project was carried out on site by the Finnish company-Solar Water Solutions. The desalination unit consists of a reverse osmosis system installed in a container. The system works thanks to a solar mini-grid. The entire installation is capable of supplying 3.5 m3 of drinking water per hour. “The lifecycle costs of this solar desalination solution are more than 70% lower than conventional systems, because there are no energy costs and certainly no fossil fuel (diesel) requirements,” explains Antti Pohjola, General Manager of Solar Water Solutions.

Solar desalination technology was also implemented in South Africa during the worst of the water crisis in Cape Town in 2018. TWS-Turnkey Water Solutions has commissioned a containerised desalination unit powered by solar energy and capable of supplying 100 m3 of water per day.

A test for ongoing projects in the country

The water produced by the small containerised plant in Henties Bay will be used for domestic consumption and irrigation. “The impact we hope to achieve with this plant is to contribute to food security and increase energy supply while combating and mitigating the effects of climate change,” said Kenneth Matengu, Vice Chancellor of the UNAM during the inauguration ceremony.

Namibia, an arid country where surface freshwater resources are scarce, is enthusiastic about the success of such a project. The success is all the more positive as the government plans to install several small groundwater desalination plants across the country. This project has even made progress in the localities of Bethanie and Grünau. Namibia Water Corporation (NamWater), the state-owned company that distributes drinking water in Namibia, has issued a call for tenders for feasibility studies for these two desalination plants. The call attracted the attention of several companies. The desalination plants in Bethany and Grünau will be used as a test for several other small installations that will be built in other localities across Namibia. As a result, intelligent water management, in the wake of decentralised electricity production, is developing in the off-grid sector in Africa.