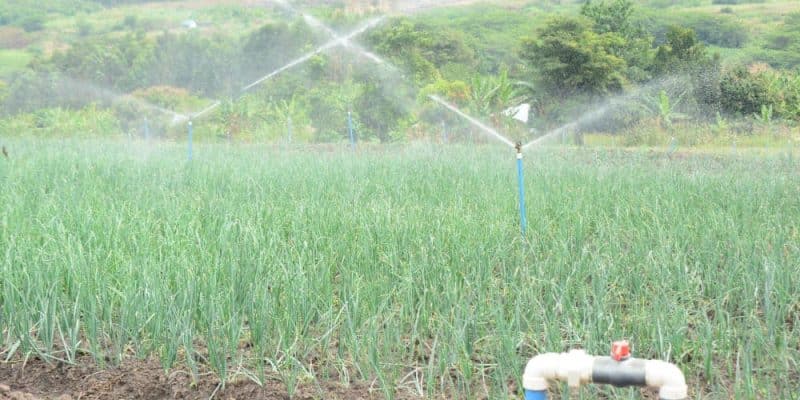 In Uganda, the Ministry of Water and Environment has inaugurated the Small Scale Irrigation Programme in Garuka, a village in Rukungiri District. The initiative aims to strengthen the resilience of smallholder farmers to drought.

New facilities are supplying water to small-scale farmers in Garuka, Rukungiri District, Uganda. These include a solar-powered pumping station, a sprinkler system and a 60 m3 water tank, which were inaugurated on 18 August 2022 by officials from the Ugandan Ministry of Water and Environment.

The commissioning of these facilities will make water available to smallholder farmers in 13 households in Garuka. This will help to improve their agricultural yields.

Crops grown include onions, tomatoes, cabbage, etc. The programme will also enhance food security for the people of Garuka. In this village, as elsewhere in Uganda, agriculture remains the main activity, providing income, employment and livelihoods for at least 40% of the population. According to the World Bank, the sector employs 70% of the population (87% of women and 63% of men) and more than 80% of the poorest in rural areas. These advantages are threatened by climate change, which is manifesting itself in the increase of droughts and the scarcity of rainfall.

To ensure the sustainability of the new facilities, the Ugandan Ministry of Water and Environment has also built the capacity of the beneficiary smallholder farmers in Garuka to properly manage and maintain them.

The Small-Scale Irrigation Programme, which is nearing completion, brings the Ugandan government closer to one of its objectives, which is to improve the water supply for Ugandans. Other initiatives are underway, including the installation of irrigation systems at 687 sites in several districts of the country. Nexus Green, which specialises in the design, supply, manufacture and delivery of affordable solar solutions, will provide all the installations.