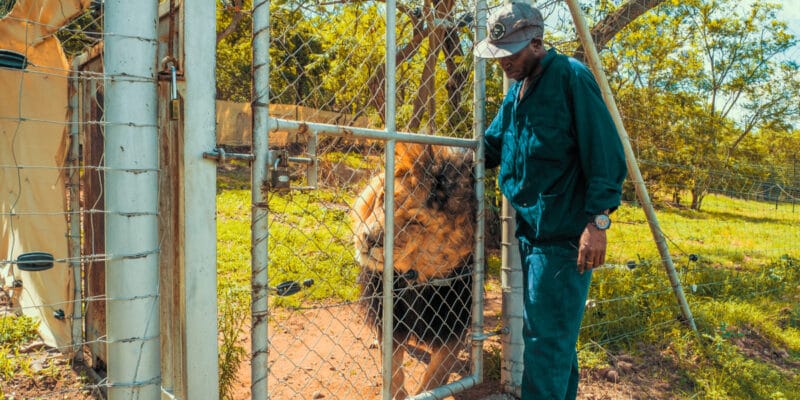 The South African government announced on May 2nd, 2021 its intention to ban the breeding of lions in captivity. This decision was taken in accordance with the recommendations of a commission charged by the government to examine the rules governing the hunting, trade and captivity of lions, elephants, rhinos and leopards.

The lion will soon be given greater protection in South Africa. The southern African country has just announced its intention to ban the breeding of lions in captivity, whether for hunting purposes or to allow tourists to pet lion cubs. “We no longer want captive breeding, hunting of captive bred animals, cuddling of captive lion cubs, use of captive lions,” says Barbara Creecy, South Africa’s Minister of the Environment.

This decision, which is only waiting for a law to be applied, follows the publication of a 600-page report produced by a commission mandated by the government to examine the rules governing the hunting, trade and captivity of lions, elephants, rhinoceroses and leopards. According to the commission, the domestication and captive breeding of lions is contributing to the decline of their population. According to the South African-based non-governmental organisation (NGO) Endangered Wildlife Trust, only about 3 500 lions live in the wild in the country. While conservationists estimate that 8,000 to 12,000 lions are kept on some 350 farms in South Africa for hunting in enclosures, the bone trade, tourism or scientific research.

African lions could become extinct before 2050

According to scientists, the lion population in Africa has halved in the last 25 years and if nothing is done to stop the decline, the species could become extinct by 2050. This situation has prompted the International Union for the conservation of Nature (IUCN) to place the cat on the Red List of Endangered Animals.

Read also: AFRICA: Lionscape, a coalition to protect lions and double their numbers

The South African Commission on Wildlife Hunting, Trade and Captivity Regulations has also recommended the phasing out of captive breeding of rhinos, and a review of options for the future disposal of rhino horn stocks, which have been under moratorium since 1977. South Africa is home to about 80% of the world’s rhino population and more than 300 rhino breeders.