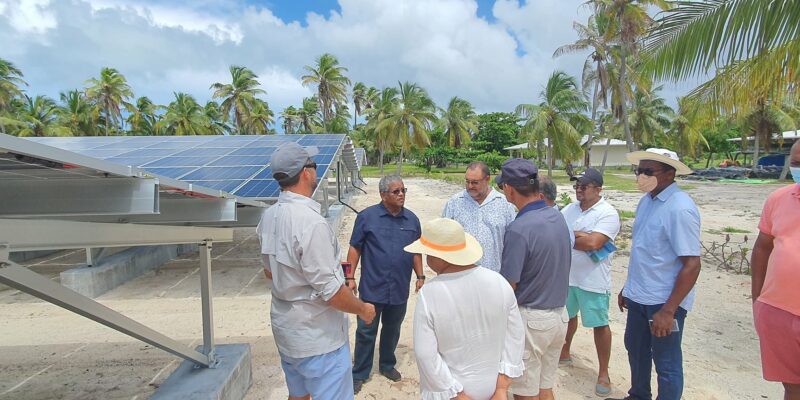 In the Seychelles, the Islands Development Company (IDC) is commissioning two solar photovoltaic power plants to provide electricity to the people and businesses of Astove and Farquhar islands. These installations save on fuel costs.

The recently commissioned solar plant on Farquhar Island consists of 510 panels capable of delivering 250 kWp. The installation provides 94% of the electricity needs of this island of over 13 km2. The second installation is capable of delivering 150 kWp through 342 solar panels. The electricity generated supplies 93% of the households and small businesses on Astove Island.

The construction of the new solar power plants was launched in October 2020 by the Islands Development Company (IDC), a structure set up by the Seychelles government to ensure the sustainable development of 14 islands in the archipelago. According to Glenny Savy, the IDC’s managing director, the new solar power plants will enable the two beneficiary islands to reduce pollution and, above all, to save money on electricity production. Until now, these islands in the Indian Ocean have generated electricity using diesel generators.

The IDC will now use the savings from the two solar photovoltaic plants to develop other sustainable infrastructure. And the state-owned company is not stopping there, as it plans to commission a 2.5 MWp solar plant in Desroches. The island, which covers an area of 4 km2, is located 230 km southwest of Mahé. The future plant will bring to four the number of solar plants built by the IDC within the framework of its mission in the Seychelles archipelago.

“By June next year (2022), most, if not all, of the islands managed by the IDC will be using solar energy, which means that we will be using 100% green energy,” promises Glenny Savy. The IDC commissioned its first ever solar photovoltaic plant on Alphonse Island in 2019. The 750 kWp park was built by Sustainable Power Solutions (SPS), a South African-based company. The installation operates with a battery storage system with a capacity of 1,500 kWh.