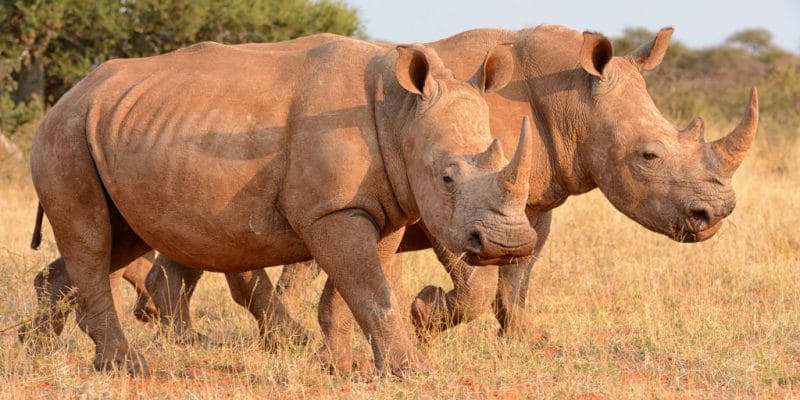 Rwanda successfully completed the transfer of 30 white rhinos, a species highly threatened by poaching. The pachyderms will further diversify the rich biodiversity of Akagera National Park.

This is one of the largest transfers of pachyderms in Africa in recent years. Thirty southern white rhinos are joining Akagera National Park, located in north-eastern Rwanda near the Tanzanian border. These pachyderms are being transferred from and Beyond Phinda Private Game Reserve in South Africa. These huge mammals can reach a length of 4 m, as well as a height at the withers of 1.90 m and weigh between two and three tons.

The southern white rhinos were transported to Rwanda via a special flight by a Boeing 747 that travelled 3,400 km. According to Peter Fearnhead, the executive director of African Parks, the project required extreme care and hard work. The 30 rhinos had to arrive safely and in good health. This exceptional operation by the number of transferred pachyderms was ensured by the Development Council of Rwanda (RDB) and the international organization of protection of nature African Parks. The two managers of Akagera National Park received support from and Beyond, as well as funding from the Howard G. Buffett Foundation.

A solution to poaching?

“This is an opportunity for Rwanda to significantly enhance its contribution to rhino conservation, as Akagera is set to become a globally important sanctuary for black and, now, white rhinos. This is very timely for the conservation of these highly endangered species,” says Ariella Kageruka, RDB’s acting director of tourism. Slow to reproduce like any other large mammal, the southern white rhino is particularly threatened by poaching.

When slaughtered, its horns are harvested and sold on the black market, mainly in Asia. As of 2020, 80% of the world’s remaining rhinos are found in South Africa. The rainbow nation, however, has become the epicentre of rhino poaching. An upsurge in rhino poaching was observed in 2008 and again in 2012. According to South African authorities, the number of rhino deaths due to poaching then rose sharply to a record 1,215 individuals in 2014. According to Save the Rhino International, more than 1,000 rhinos were killed each year between 2013 and 2017.

A boon for ecotourism in Rwanda

The goal of the recent operation is to expand the range of the white rhino and create a new breeding stronghold in Rwanda, supporting population growth to ensure the long-term survival of the species in the wild, “as high levels of poaching continue to put unsustainable pressure on current populations,” says African Parks.

The 30 southern white rhinos are being released into Akagera National Park, whose restoration continues, including the reintroduction of five black rhinos in June 2019. In addition to the pachyderms, the park is home to other species typical of the African savannah, including the lion, which is above the food chain. The arrival of the southern white rhinos is expected to attract more tourists to the East African country. In 2019, that is, before the Covid-19 pandemic, this sector contributed 15.1% to Rwanda’s gross domestic product (GDP).