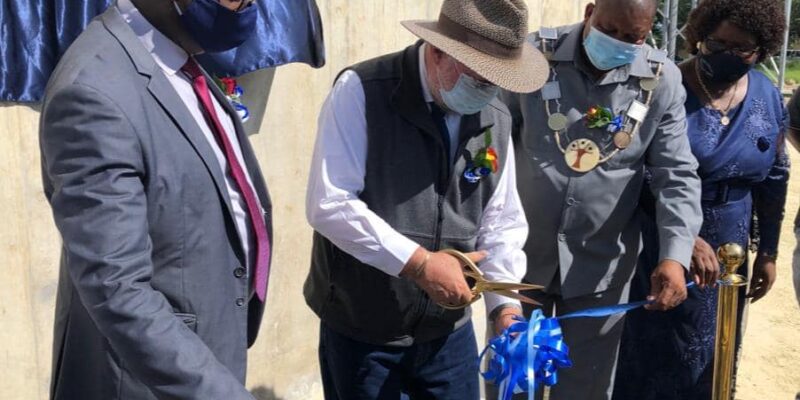 The Namibia Water Corporation (NamWater), the public company responsible for water management, has just commissioned a reservoir as well as a groundwater defluorination plant in Eenhana, in the Ohangwena region of Namibia. The entire works cost N$29.6 million (more than US$2 million).

The city of Eenhana, in the Ohangwena region of Namibia, is becoming self-sufficient in drinking water supply. The Namibia Water Corporation (NamWater) has just equipped the town with new drinking water installations, including a 5000 m3 reservoir which will store water pumped from the water table. This water will first be defluorinated in a plant built in Eenhana.

“The boreholes are 350m deep. After the work was completed, we found that the level of fluoride in the water, between 3.0 and 4.0 mg per litre, was too high to be acceptable,” explains Calle Schlettwein, Namibia’s Minister of Agriculture, Water and Land Reform. According to the World Health Organisation (WHO), excess fluoride causes, among other things, conditions ranging from benign dental fluorosis to disabling bone fluorosis.

A project supported by Germany

The Namibian public company has also provided Eenhana with brine drainage basins and new pumps to improve the population’s drinking water supply. Prior to this project, NamWater supplied a 750 m3 reservoir in Eenhana from the Oshakati drinking water plant in the Oshana region. The quantity of water was insufficient to meet household demand. The Oshakati plant treats water from the Calueque dam on the Cunene River in Angola. The level of the reservoir has fallen sharply in recent years due to the Drought.

The water supply project at Eenhana cost N$29.6 million, or more than US$2 million. The government received a grant of N$5.6 million (about US$380,600) from Germany via the Bundesanstalt für Geowissenschaften und Rohstoffe (BGR).