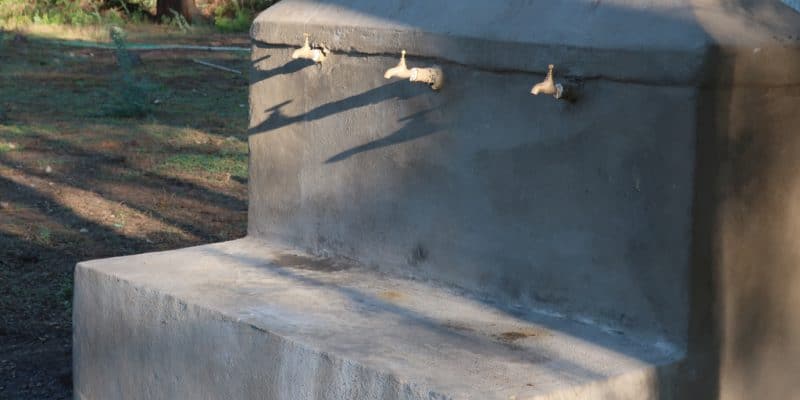 Namibia's Minister of Agriculture, Water and Land Reform, Calle Schlettwein is inaugurating 102 water points in the Epembe constituency, Ohangwena region of Namibia. The new facilities are equipped with prepaid meters.

This is one of the benefits of the Namibia Water Sector Support Program (NWSSP). Namibia’s Minister of Agriculture, Water and Land Reform, Calle Schlettwein recently inaugurated new drinking water facilities in Epembe, a constituency in the Ohangwena Region. A total of 102 water points supply people in six villages, namely Eenheni, Etapa, Onhinda, Omuhongo, Onaame and Onamundidi. The Epembe constituency has a population of about 15,000.

Namibia’s Minister of Agriculture, Calle Schlettwein, explains that of the 102 water points, 95 are supplied through pipelines and the remaining seven directly from boreholes. The Namibian government has entrusted the management of the new facilities to the Water Point Committee (WPC). The committee is composed of members selected under the Community Based Management (CBM) strategy, which ensures the proper management of the water points and water infrastructure.

Epembe’s water points are equipped with prepaid meters that facilitate their use. “In the district, a cubic meter of water costs about US$0.94 (about N$14). A household in Epembe consumes an average of two cubic meters of water per month,” says Jona Musheko, an official at the Namibian Ministry of Agriculture.

The regions of Kavango East, Oshikoto, Zambezi, Khomas, Oshana and Omusati also benefit from the NWSSP program. Eventually, the program will reach one million people directly, 250,000 people indirectly. NWSSP will also benefit vulnerable areas in Kunene and ǁKaras regions. “The objective is to ensure sustainable production and transfer of water resources to improve access, quality and safety of drinking water and to industry in urban and rural centres in the Central, North Central and Eastern regions of Namibia facing drought,” says the African Development Bank (AfDB), which is co-financing the NWSSP. The Kreditanstalt für Wiederaufbau (KfW), the German development agency, is also supporting the government with the program. The NWSSP will run until December 2025 at a cost of US$222.6 million.