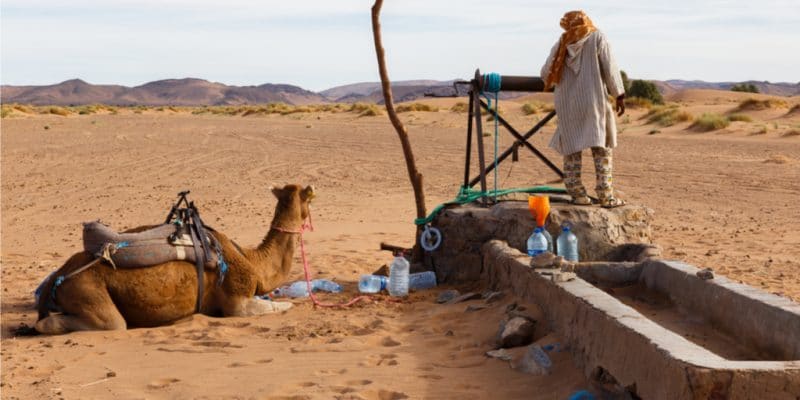 A drinking water supply project has been launched in Timbedra, a city in southeastern Mauritania. It is supported by the Arab Fund for Economic and Social Development (Fades).

The Mauritanian President recently visited Timbedra. Mohamed Ould Abdel Aziz has launched a drinking water supply project in this city, south-east of the country, which has a desert climate and more than 56,000 inhabitants.

The project is to draw water from the aquifer. In this region, remarkable for its sand dunes, there are two important aquifers, Baghla and Derwich. According to the Mauritanian authorities, both will provide supplies to the cities of Nema and Timbedra as well as to several villages in between. It is planned to build two pumping stations of 5000 m3 and 1000 m3 per day. The pumped water will be transported over 250 km, along a pipeline composed of iron pipes with a diameter of between 200 and 400 mm, and stored in a water tower.

The authorities will also install no less than 150 km of pipes to bring water to the districts of the city of Timbedra. This will make it possible to make 5,000 domestic connections. The people will have to be patient, however, because the work will take almost three years. The project will cost $50 million and the State will finance it with the support of the Arab Fund for Economic and Social Development (Fades).

The current drinking water project dedicated to the city of Timbedra is not the only one to rely on the groundwater of Baghla and Derwich. It is also the case of the Dh-Har Project, which the government describes as “the largest drinking water supply project in the history of Mauritania”. Launched in August 2018, it is composed of three phases. First, the development of 24 wells with a combined capacity of 56,000 m3 of water per day. These wells will then be connected to several water towers through pipes. The water is intended to supply the populations of the cities of Aïoun and Djiguenny, located in the south of the country.

This also involves the construction of 110 km of water supply for two stations in Derwich and Ras Dh’Har with a treatment capacity of 5000 m3 of water per day.