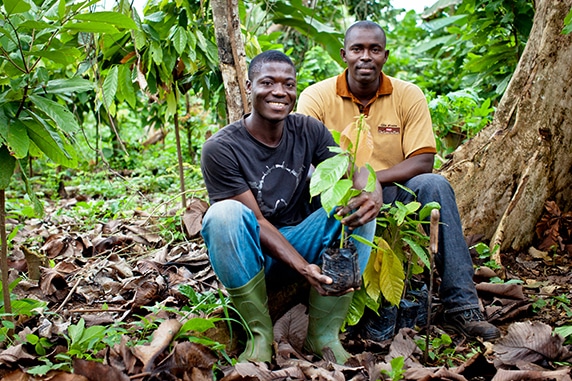 As part of the government's "Abidjan Initiative", which aims to create the conditions for environmental sustainability in the agricultural sector, the Ivorian subsidiary of the Swiss food group Nestlé will strengthen its supply chain, particularly in cocoa and coffee, in order to guarantee the sustainability of Ivorian forests.

In Ivory Coast, cocoa and coffee are the main economic drivers, but they are also the source of deforestation. In this context, the Ivorian subsidiary of the Swiss multinational Nestlé, which specialises in agri-foods, wants to change the situation by strengthening its sustainability policy in this West African country.

To do this, the multinational, which buys, processes and sells products derived from Ivorian cocoa and coffee, wants to turn these two raw materials into a weapon against desertification. “Nestlé’s agricultural supply chain will contribute to the fight against climate change and to the achievement of our goal of zero net emissions by 2050,” promises Magdi Batato, Nestlé’s director of operations in Ivory Coast.

While no broad lines of Nestlé’s perspective were specified, its country manager announced on the sidelines of the 15th Conference of the Parties to the United Nations Convention to Combat Desertification (COP15) in Abidjan that his company is banking on a series of training courses on agricultural practices and agroforestry that will enable local farmers to increase their income while preserving the environment and biodiversity.

Towards more sustainable cocoa by 2025

According to Thomas Casio, the company buys 150,000 tonnes of Ivorian coffee per year, which is 8% of the national production. With regard to cocoa, a report published in 2017 by the non-governmental organisation (NGO) Mighty Earth indicates that 90% of protected areas have been transformed into cocoa plantations in Ivory Coast. This has prompted Nestlé to finalise its programme to distribute 1,250,000 indigenous and fruit trees in 2020 in Ivory Coast and Ghana to make farms more climate resilient.

At the same time, the multinational has contributed 2.5 million Swiss francs (2.3 million euros) to the conservation and rehabilitation of the Cavally classified forest, which will be implemented by the Société de développement des forêts (SODEFOR).In addition to these initiatives to combat cocoa-related deforestation in Ivory Coast, the Swiss group launched the Nestlé Cocoa Plan in 2009. The programme aims to supply Nestlé with 100% sustainable cocoa by 2025 by addressing supply chain issues such as child labour, gender inequality and poor social conditions.