Homepage » GABON: the degradation of the Mindoubé mangrove reaches its alert level

GABON: the degradation of the Mindoubé mangrove reaches its alert level 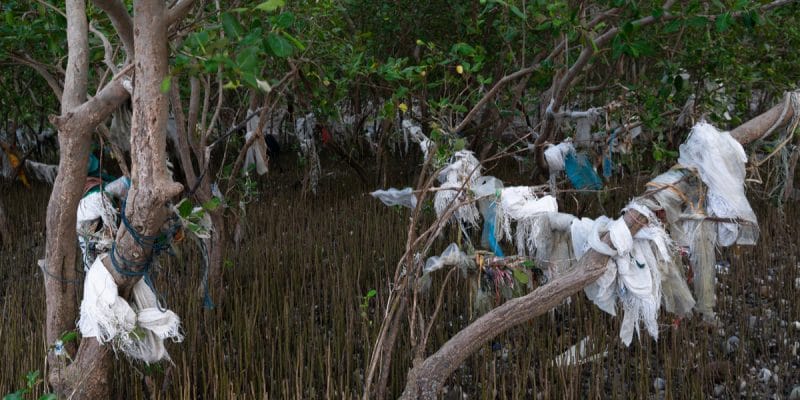 The Gabonese Ministry of Water and Forests, the Sea, the Environment, in charge of the Climate Plan and the Land Allocation Plan has just organised two awareness-raising activities for the protection of mangroves. One of them focused on the restoration of the Mindoubé Shanghai mangrove in the 5th district of Libreville. The wetland has seen its surface area reduced by 21 hectares due to human activities.

The degradation of the Mindoubé mangrove is of concern to the Gabonese authorities. The area located in the fifth district of the capital Libreville received on August 4th, 2021, a restoration mission led by the Deputy Secretary General of the Gabonese Ministry of Water and Forests. Armed with rakes and boots, the agents of the ministry cleaned up the surroundings of this important carbon sequestration and fauna and flora reproduction environment.

Preceded by a conference-debate on the ecological role of mangroves, the restoration mission carried out in Mindoubé, comes within the framework of the delayed celebration of the International Day of Mangroves, under the national theme “the mangrove: place of carbon sequestration and reproduction of fauna and flora”. The deputy secretary general of the Ministry of Water and Forests reminded the audience that it is always possible to take action to reforest devastated areas. “Because 100,000 hectares of mangroves disappear every year in the world, due to human activity. Our country is also affected, as shown by the Mindoubé sites (…) it is essential to insist on the need to preserve these areas,” explains Obame Nguéma.

Gabon has lost 70 hectares of mangrove in three years

The mangrove of the Gabonese coastline is under considerable pressure from urban expansion, its use by fishermen for domestic needs, the installation of smokehouses and the expansion of landing stages. But it is also a victim of spills of dangerous products, notably effluents, hydrocarbons and used oils.

Read also-GABON: the worrying degradation of mangrove ecosystems in Port-Gentil

In April 2021, several non-governmental organisations (NGOs) sounded the alarm on the destruction and degradation of mangroves in Gabon. The latest figures show the disappearance of 69.9 hectares (ha) of mangrove located in three districts of Libreville. These are the first district with 37.23 ha, the fifth district with 21 ha, and the sixth district with 8.67 ha. “What is in danger through the destruction of mangroves in the Idolo area (north of Libreville, editor’s note) is our environment. These mangroves serve as a water watch for these marine storms and in relation to climate change, they play a role of bio filter,” explains Paul Kopedina Itanguino, president of the non-governmental organisation (NGO) Actions citoyenne pour le développement local (ACDL).