Homepage » GABON: the worrying degradation of mangrove ecosystems in Port-Gentil

GABON: the worrying degradation of mangrove ecosystems in Port-Gentil 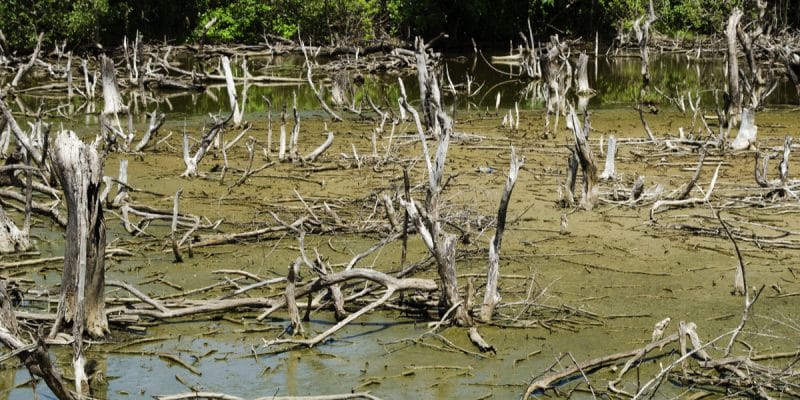 The non-governmental organisation (NGO) Healthy Growth Environment has just completed several missions in Port-Gentil, the economic capital of Gabon, located in the west of the country. The missions consisted of taking stock of the degradation of mangrove ecosystems in the city. The report of these missions was presented on June 18th, 2021 to the Gabonese government through the Minister of Water, Forests, the Sea, the Environment, in charge of the Climate Plan and the Land Use Plan, Lee White.

The degradation of mangrove ecosystems in Port-Gentil, the oil capital of Gabon, remains a concern. The report of the inspection missions carried out in this city by experts from the non-governmental organisation (NGO) Healthy Growth Environment, reports advanced degradation and pollution of mangrove ecosystems as well as the ancestral tombs of the Orungu people of Port-Gentil.

After identifying the causes and consequences of this degradation on living and non-living organisms, Croissance saine environnement, through its president Nicaise Moulombi, presented the report of the Port-Gentil missions to Lee White, the Gabonese Minister of Water, Forests, the Sea and the Environment, in charge of the Climate Plan and the Land Use Plan. “The presentation of the results of our studies to the Minister of the Environment comes at a time when our country has just concluded the activities deployed for the celebration of the national week of the environment and especially at a time when President Ali Bongo Ondimba has just reaffirmed his commitment to the decade of ecosystem restoration launched by the United Nations,” explains Nicaise Moulombi.

The Healthy Growth Environment missions to Port-Gentil were conducted as a prelude to the 26th Conference of the Parties (COP 26) to be held in Glasgow (Scotland), where Gabon will hold the presidency of the African negotiators’ group on climate change. The NGO intends to use this event to launch a petition against oil companies that are degrading biodiversity in Gabon. The petition will be made jointly with organisations such as the Network of Civil Society Organisations for the Green Economy in Central Africa (Roscevac), the Observatory for the Promotion of Sustainable Development of Products and Services of Gabonese Industries (Oddig) and the Pan-African Climate Justice Alliance Gabon section (Pacja/Gabon).

Cases of oil pollution in the mangroves of Port-Gentil are recurrent. In January 2021, 5,700 inhabitants of the Étimboué peninsula in Port-Gentil joined the Network of Free Civil Society Organisations for Good Governance in Gabon (ROLBG) to initiate legal proceedings against Perenco. The Franco-British oil company is accused of oil pollution in the Étimboué Division.