CONGO: Olam and WCS agree on biodiversity around Nouabalé-Ndoki Park 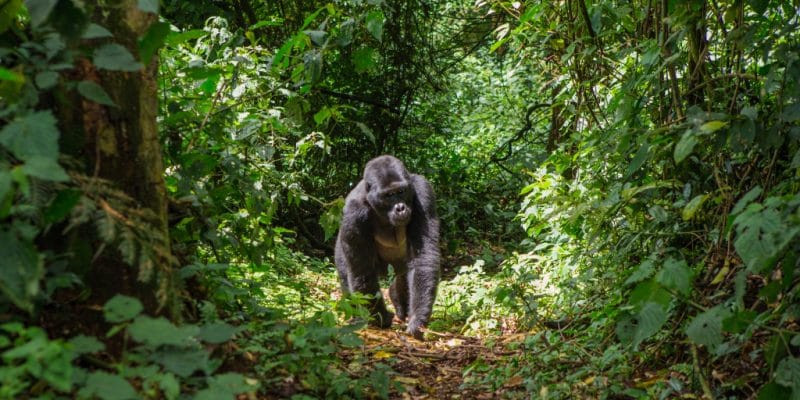 An agreement has just been signed between the Congolese authorities, Congolaise Industrielle des Bois (CIB), the subsidiary of Olam International, and the non-governmental organisation (NGO) Wildlife Conservation Society (WCS). This is a renewal of an existing partnership between the three parties aimed at safeguarding biodiversity around the Nouabalé-Ndoki National Park in northern Congo.

The agreement was signed between the Congolese Ministry of Forest Economy, the Congolaise Industrielle des Bois (CIB) and the American non-governmental organisation (NGO) Wildlife Conservation Society (WCS). This is the renewal of a partnership that has existed between the three parties since 1999. The preliminary agreement allowed for the implementation of the Nouabalé-Ndoki National Park Peripheral Ecosystem Management Project (Progepp). The project focused on the development of a buffer zone around the Nouabalé-Ndoki National Park, located in northern Congo.

The buffer zone covers three forest management units (FMUs). These are areas reserved for the activities of local communities and indigenous people, including agriculture and timber exploitation. These FMUs are managed by CIB, a subsidiary of the Singaporean giant Olam International, which specialises in food trading and brokerage. The extension of the partnership agreed on August 8th, 2021 allows for the continued preservation of biodiversity around the Nouabalé-Ndoki National Park, through the assignment of eco-guards, bio-monitoring and collaboration with local communities to protect the park’s wildlife from poaching.

“There is no single strategy for effectively halting biodiversity loss while improving people’s lives. We are convinced that a forest conservation approach can only succeed if all stakeholders work together in a concerted effort. We are delighted to continue our partnership with WCS and the government of the Republic of Congo to strengthen efforts to protect endangered species and local biodiversity in this unique and ecologically important region,” says Vincent Istace, Director, Corporate Responsibility and Sustainability, CIB.

The northern Congo-based company is the recipient of four FMUs, Pokola, Kabo, Loundoungou-Toukoulaka and Mimbeli Ibenga. These forest concessions cover 2.2 million hectares and employ over 1,000 people in Congo. The CIB places sustainability at the centre of the management of these forest concessions. In fact, all four FMUs have been awarded the Forest Stewardship Council (FSC) label. This environmental label aims to ensure that the production of wood or wood-based products respects procedures that guarantee sustainable forest management.

The fight against poaching

The protection of the biodiversity of the Nouabalé-Ndoki National Park depends on the good management of its buffer zone. The park, whose management is delegated to the American NGO WCS, covers an area of 4,000 km2 and is home to a large number of critically endangered wildlife species. This is the case of the African forest elephants. These pachyderms, whose population is being decimated by poachers, cohabit with populations of chimpanzees and western lowland gorillas.

It is to preserve this rich biodiversity that Nouabalé-Ndoki is listed as a World Heritage Site by UNESCO (United Nations Educational, Scientific and Cultural Organisation). Moreover, in the wake of the agreement recently signed between the CIB and WCS, the Congolese government has committed itself to setting up an anti-poaching unit on the Mimbeli-Ibenga forest concession. This unit of 15 Eco guards will cover approximately 650,000 hectares north of the Progepp area. According to Olam, the Eco guards play an important role in protecting local biodiversity and regularly undergo intensive refresher training, including courses on human rights and wildlife crime legislation, to strengthen their community engagement and biodiversity conservation efforts.