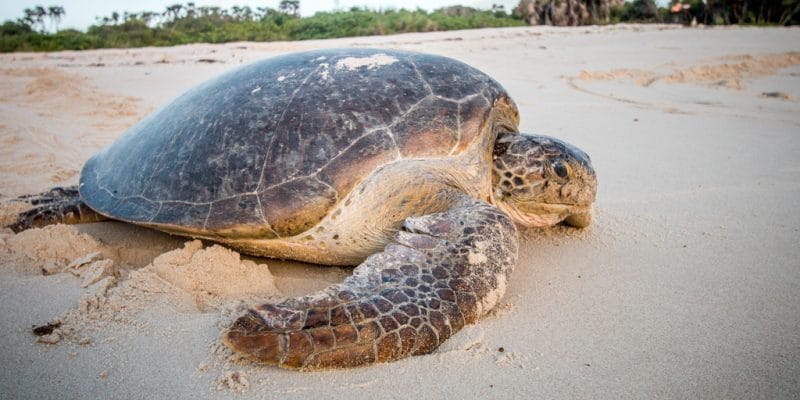 In Cameroon, the agro-industrial company Camvert is providing a new environmental guarantee to ensure the conservation of marine turtles in Campo in the southern region. In this part of the country, the company has been implementing a palm plantation project for several years, which has been highly contested by local residents and environmental organizations.

While the agro-industrial company Camvert has just obtained tax exemptions from the Cameroonian government for its oil palm plantation project in the southern region, the company is providing new environmental guarantees. This time, Camvert promises to ensure the conservation of marine turtles in the locality of Campo in the Ocean Department in southern Cameroon, where it is implementing its project.

“We have initiated dialogue bridges, to see how to put in place mechanisms of collaboration. Because Camvert is convinced that neither over conservation nor industrialization without conscience can develop us. And it is necessary to reconcile the two. In addition, the state has created a marine park in recent months. We are waiting for the establishment of the park to accompany the process of turtle conservation,” says the Cameroonian billionaire and owner of Camvert, Aboubakar Al Fatih.

The locality of Campo, located in the department of Ocean in southern Cameroon, is home to important wildlife and plant resources, including large mammals such as forest elephants, buffaloes and great apes living on 60,000 hectares of equatorial forest. However, the concession granted by the State to Camvert covers 50,000 hectares for the cultivation and processing of palm oil. This palm plantation project is strongly contested by the local residents of Campo.

The risk of marine pollution

“The waste that Camvert will produce will flow into the sea. Given that Camvert has used many more chemicals in its plantation, what will we do with these turtles? Not just turtles, but all the species that are in the ocean,” asks Denis Gnamaloba Mondjele, president of the Tube Awu Community Research and Development Association in Ebondje locality in Campo.

The local environmental preservation organizations mention, among other things, the non-application of the memorandum on conservation measures for marine turtles of the Atlantic coast of Africa, signed in Abidjan (Ivory Coast) on May 29, 1999 by some thirty countries, including Cameroon.

In Cameroon, the authorities have announced the creation of a marine park in 2021 called “Manyange na Elombo”, with an area of 11,300 hectares. According to a government decree, the site will “limit the incursion of industrial fishermen who deplete the sea of fish, protect spawning grounds and preserve certain fish species such as the sea turtle, the African manatee and the humpback dolphin.

Read also-CAMEROON: Camvert and the forest peril in the Congo basin

This promise is in addition to the retrocession of 10,000 hectares of land (out of the 50,000 hectares that will be occupied by the Camvert project, editor’s note) for the conservation of biodiversity in the locality of Campo. At the same time, Camvert is also committed to reducing the impact of its activities, to protect the fauna of Campo Ma’an National Park, with which it shares a border of about 50 kilometers. All these initiatives are still not enough to ease the discontent of the residents of Campo.