Homepage » CAMEROON: Camvert and the forest peril in the Congo basin

CAMEROON: Camvert and the forest peril in the Congo basin 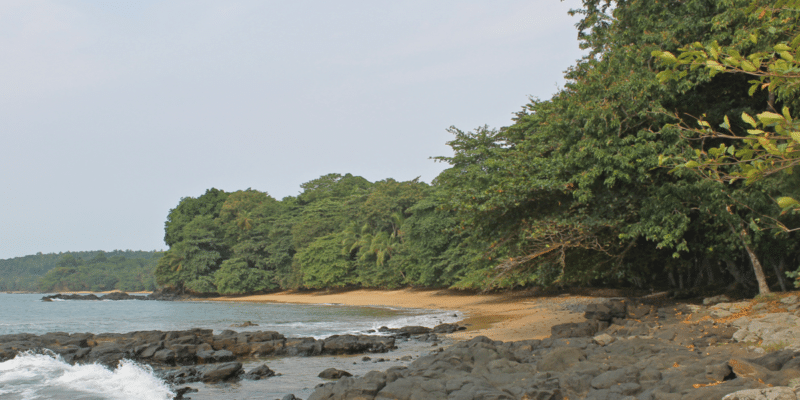 The coastal town of Campo in southern Cameroon has become the scene of a dispute over deforestation and environmental pollution. Some local communities have joined environmental NGOs (non-governmental organisations) to denounce the establishment of Camvert. This is the project to develop the largest palm plantation in Central Africa, which will swallow up 50,000 hectares of forest, the equivalent of three times the Cameroonian capital, Yaoundé.

The waves of the Atlantic Ocean lap at Ebodje beach, home to one of the 19 rural communities in the Campo district of southern Cameroon. Returning from a successful fishing trip, Léandre Mboula Mboula is sharing a bottle of whisky with his fishing companions, when he has the opportunity to denounce his worst nightmare. Camvert, a 50,000-hectare oil palm monoculture plantation project, is being set up in Campo. “Our main activity is fishing. But if Camvert moves into this village, their waste will be dumped in the sea and we will have more fish. Even in the forest there will be damage. We won’t have any more game or medicinal plants because of the deforestation,” says Léandre Mboula Mboula, looking worried.

The cutting of the trees that the local man is talking about began on September 12th, 2020, for an initial plantation of 1,500 hectares. The start of the activity is synonymous with danger in the village. “If this plantation comes here, we are screwed. I recently visited the area where Camvert has started work, and I was shocked by the extent of the damage: they have cut down trees as far as the eye can see,” says Daniel Moundjèlé, another fisherman from the village.

In addition to fishing, hunting and farming, the communities of Campo rely on tourism for their livelihood. The vastness of the forest, which is still untouched in some places, the Campo-Ma’an nature reserve and the beach with its fine white sand, which stretches for about 80 kilometres to the border with neighbouring Equatorial Guinea, are real tourist attractions for the commune. In Ebodje, for example, the local residents have built tourist huts on the seafront. They also have a centre dedicated to their main tourist attraction, the sea turtles, whose disappearance they now fear. “Turtles don’t like polluted coastlines. So, if Camvert sets up in this village, the waste produced by their activities will prevent the turtles from coming to Ebodjé to lay their eggs. As a result, we will no longer have anything to attract tourists,” explains Alexandre Zong, the coordinator of the Ebodjé turtle house. Rejecting the job guarantees promised by the agribusiness company, i.e. 8,000 direct jobs and 15,000 indirect jobs, the young fishermen of Ebogé are making their activist intentions known to Camvert. They say they can count on the intervention of their ancestors, who are found in strange sacred places in the forest and on the edge of the sea.

The opposition of local people to the Camvert project is therefore real on the ground. Several reports by environmental NGOs (non-governmental organisations), including Greenpeace and Green Development Advocates, had already made this clear. Each time, these documents were brushed aside by the palm oil promoters, who in turn denounced NGOs in the pay of interest groups that profit from the importation of palm oil into Cameroon, i.e. about 200,000 tons per year, a real economic abyss, and for which the Camvert project intends to provide a solution.

The demands of Greenpeace

Cameroon Vert SA (Camvert) is an agro-industrial complex for the plantation and processing of oil palms currently being built in Campo, a council located in the department of the ocean, in the southern region of Cameroon. 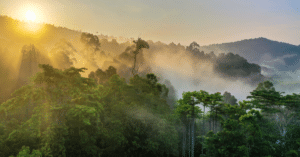 The project for the largest palm plantation in Central Africa, with an investment cost of 237 billion CFA francs (about 361 million euros), for a production of about 180,000 tonnes of palm oil per year, is presented by NGOs and some indigenous people as “a myth of sustainable forest conversion and a danger to the food security of local communities”. According to these organisations, the project must be stopped because, in addition to violating forestry law, it represents a climate disaster due to the destruction of 50,000 hectares of forest. “For local communities, the forest is their living environment. Without exaggeration, I think we should talk about cultural genocide. Because these populations will no longer have access to the tree bark with which they heal themselves, they will also lose their places of worship and sacred forests. It should be remembered that in order to maintain an oil palm plantation, it is necessary to pollute. This means that the rivers inside the forests will disappear after being polluted, and the spraying of pesticides will affect the health of the neighbouring populations,” explains Ranece Ndjeudja, Greenpeace Africa’s forest campaigner.

NGOs in the pay of interest groups?

Apart from the concordance between the denunciations of the NGOs and those expressed by certain communities in Campo, our field visit did not allow us to enter the young palm grove, as we were denied access by both the prefectural authority and the general management of the Camvert company from its offices in Yaoundé. It is indeed from the capital that the company will give the environmental guarantees foreseen in its development. “Firstly, Camvert’s three processing units will use biofuel boilers and not heavy fuel oil. We will set up a plant that will use biomass from deforestation and plantation waste. This renewable energy will not only meet the mill’s electricity needs, but also those of the people of Campo. And since the factories produce a lot of wastewater, we will also build a plant that will convert the wastewater into organic fertiliser,” explains Mamoudou Bobo, Camvert’s coordinator.

Continuing with its environmental approach, Camvert specifies that the 50,000 hectares of forest on which its plantation will be spread will not be razed all at once. It is a gradual deforestation, allowing the ecological balance of the area to be preserved. That said, the company of Cameroonian Aboubakar Al Fatih, who is also the boss of the logging company Boiscam, denounces the NGOs that are on its tail. According to him, these are NGOs in the pay of interest groups, whose action consists of instrumentalizing the populations of Campo in order to turn them against Camvert. The company claims to have signed a contract with these people. However, in a press release published on February 18th, 2021, Greenpeace accuses Camvert of not having consulted any local community.

In terms of legality, Greenpeace also points to shortcomings on the part of Camvert. The company began occupying such a large area of rainforest as Campo, without the prior approval of the President of the Republic of Cameroon by decree.

Camvert remains determined to continue its development, even if it means rowing against the reports of NGOs. With the support of the administrative authorities, Camvert emphasises its advantage for the Cameroonian economy. Its production should meet national demand, thus avoiding the need to import up to 200,000 tonnes of palm oil per year, estimated at around 45 billion CFA francs (68.6 million euros). A colossal sum, but for environmentalists it is nothing compared to the food security, biodiversity, ecosystem and ecotourism guaranteed by the 50,000 hectares of forest threatened in Campo.

Boris Ngounou, with the support of Rainforest Journalism fund and the Pulitzer Center