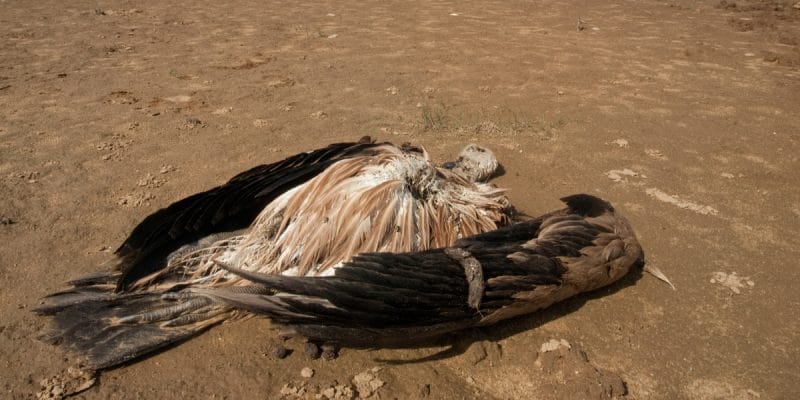 Some poachers in Botswana poisoned elephant carcasses to avoid being spotted because of vultures. The result was the death of more than 500 birds of prey of endangered species. The massacre concerns African vultures (Gyps africanus) and scavenging vultures, which are now on the verge of extinction in Botswana.

Botswana has just suffered a heavy and horrible ecological crime. A total of 537 vultures and two kidnapping eagles were killed by poachers. The dead bodies were found on June 20, 2019. After killing and dispossessing three elephants of their ivory tusks, the poachers kept the carcasses poisoned, in order to deliberately kill the vultures who would be interested in the carcasses. For these scavengers, who usually revolve around corpses, could reveal their presence.

Among the birds of prey killed were 468 African vultures (Gyps africanus) and 28 scavenging vultures, both of which are classified as critically endangered by the International Union for Conservation of Nature (IUCN).

According to Kerri Wolter, founder of Vulpro, a South African vulture protection organisation, which was cited by our Futura Planète colleagues, “Vultures are among the fastest extinct animals in the world”. The African vulture, of which there are only a few thousand individuals left in the wild, has seen its population decline by 90% over the past 30 years.

Vulture killers are also recruited from among farmers

According to experts, African vultures are often the unintentional victims of poisoning, due to carcasses contaminated with highly toxic agricultural pesticides, which kill livestock predators.

One example is Armand Aucamp, a farmer in the small town of Molteno in the Eastern Cape province of South Africa. In 2013, he was sentenced to a one-year suspended prison sentence and a fine of 700 euros, or 10,000 rand, for poisoning 46 vultures. He had loaded a carcass of carbofuran sheep, a powerful insecticide. He actually wanted to attack the jackals that were attacking his cattle.

According to Kerri Wolter, vulture poisoning should be “severely” punished, as should rhino poaching. She points out that there are only 3,700 Cape vultures left in the world. These raptors, with cream-coloured feathers and bare necks, are found in southern Africa and breed only in South Africa, Botswana and Lesotho.

The rapid decline of vultures on the continent has important consequences for populations, as vultures help to stop the spread of disease by cleaning decaying carcasses.