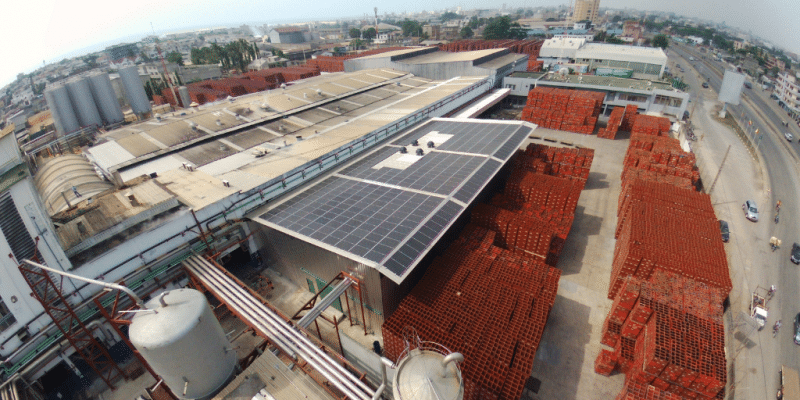 A rooftop photovoltaic solar power plant is now operational at the headquarters of the Société béninoise de brasserie (SOBEBRA) in Cotonou, the capital of Benin. The recently inaugurated installation consists of 352 solar panels, capable of providing around 450 kWh per day.

In Benin, the site of the Société béninoise de brasserie (SOBEBRA) has just become more energy self-sufficient. The company, which specialises in the production of beer, water and soft drinks, recently commissioned a rooftop photovoltaic solar power plant in the capital Cotonou. The installation, which occupies a 760 m2 plot of land, is made up of 352 solar panels capable of supplying around 450 kWh per day.

The power of the solar panels of the SOBEBRA in Cotonou should ensure a permanent supply of electricity. “This electricity will be directly consumed thanks to a self-consumption system without batteries,” says SOBEBRA. The photovoltaic solar power plant will also enable the company in this West African country to reduce its carbon footprint.

By equipping its Cotonou factory with this rooftop solar power plant, SOBEBRA is making progress towards its goal of becoming a “clean industry”. At the same time, it is securing its production in a country where power cuts have become regular. According to the World Bank’s 2018 report, barely 41.5% of Benin’s population has access to electricity. Like SOBEBRA, the government of the Republic of Benin is banking on renewable energies to make up its electricity deficit. At the beginning of December 2020, it unveiled its intention to set up a company that will be able to produce electricity or buy it from private operators. The Société béninoise de production d’électricité (SBPE) of its baptismal name will sell the resource, notably to the Société béninoise d’énergie électrique (SBEE) whose core mission will be refocused on the distribution of electricity. This will improve electricity supply at the national level.

Eleven companies are currently building eight mini-grids in Benin. These off-grid solar systems will increase the power generation capacity by 13.4 MW in this West African country and provide reliable and quality energy to several localities.