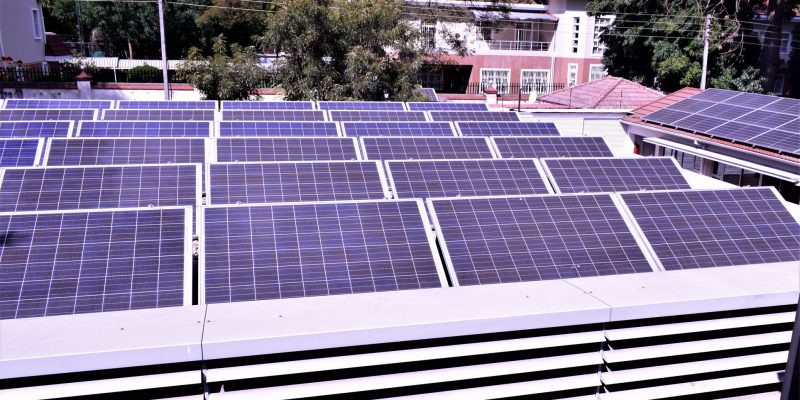 The Swiss embassy has recently acquired a photovoltaic solar system. The 160 kWp system was recently inaugurated in the presence of the Zimbabwean authorities.

The Swiss Embassy in Harare, like many government agencies and companies in Zimbabwe, has recently commissioned a solar photovoltaic system. Consisting of several solar panels, the system has a capacity of 160 kWp, a quantity of electricity that will cover all the needs of the embassy and the related residences.

Solar energy should make this Swiss diplomatic representation, which covers Zimbabwe, Zambia and Malawi, more environmentally friendly. The installation of the solar power plant “is timely in view of the effects of climate change, which are of great concern to all stakeholders worldwide, and represents another major step forward in the history of Switzerland’s investment in the Agenda 2030 for sustainable development,” says the Swiss Embassy in Harare.

In addition to supplying electricity to the embassy and its residences, the new solar system will also enable a car to be recharged. The surplus electricity will be sold to the state-owned Zimbabwe Electricity Transmission and Distribution Company (ZETDC), in accordance with its new provision allowing private individuals to sell their surplus electricity generated from the autonomous solar systems.

The Swiss diplomatic representation in Harare adopted solar energy 10 years ago with the installation of a first electricity production unit. Since then, this source of green energy has almost become a trend among Zimbabwean-based institutions and companies seeking to reduce their electricity bills or to reduce the impact of ZETDC power cuts.

It is in this context that Schweppes Africa Holding, a subsidiary of soft drinks manufacturer Schweppes, has installed a 1 MWp solar system on the roof of its factory in Willowvale in the capital Harare. The solar power plant was built by Distributed Power Africa (DPA), a supplier of off-grid solar systems and a subsidiary of the giant Econet Global.