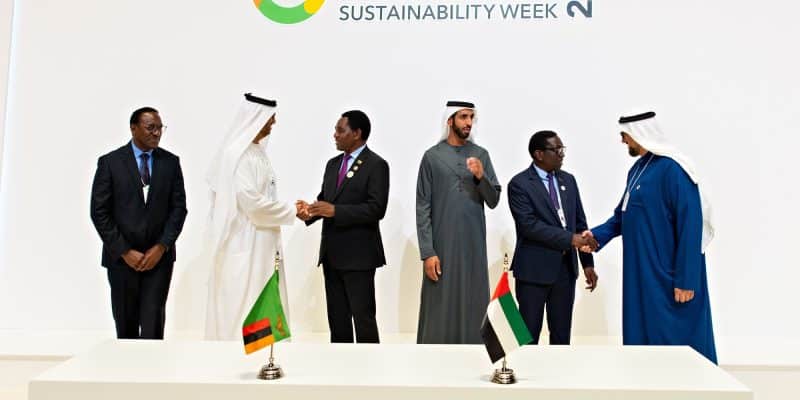 An agreement was recently signed between UAE independent power producer (IPP) Masdar and Zambia Electricity Supply Corporation (ZESCO). The partnership aims to co-develop solar projects with an overall investment of $2 billion over the next few years.

The harvest is good for Hakainde Hichilema. The President of the Republic of Zambia has returned to Lusaka after a stay in Abu Dhabi, the capital of the United Arab Emirates where he participated in the Abu Dhabi Sustainability Week. On the sidelines of the event, which ended on Thursday 19 January 2023, the state-owned Zambia Electricity Supply Corporation (ZESCO) signed a partnership with Masdar (Abu Dhabi Future Energy Company).

The agreement, signed in the presence of President Hakainde Hichilema, is for the investment of $2 billion to generate at least 2 000 MWp of solar power. Initially, the two companies have agreed to start with a 500 MWp solar power plant. This is a real boost for the energy sector in Zambia, which is only just beginning to tap into its renewable energy potential.

Zambia has opened up the clean energy market to foreign investors, including independent power producers (IPPs). The $2 billion investment in solar photovoltaics will allow Zambia to diversify its energy mix. The East African country has an installed capacity of 3,030 MW, of which 2,393 MW is generated by hydroelectric plants. The largest of these is the 1,319 MW Kariba plant, which Zambia shares with Zimbabwe. ZESCO obtains some of the electricity it distributes to people and businesses from thermal (gas and coal) and solar power plants.

With the increasing droughts in Eastern and Southern Africa, Zambia is faced with lower dam levels and therefore lower electricity production in the dry season. To cope with this situation, ZESCO wants to further diversify its sources of production by focusing on solar energy. Zambia already has an installed solar capacity of 91 MW according to Power Africa. Among the solar power plants commissioned in recent years is the 54 MWp Bangweulu plant. The park was built by a consortium of French IPP Neoen and Zambian investor Industrial Development Corporation (IDC).