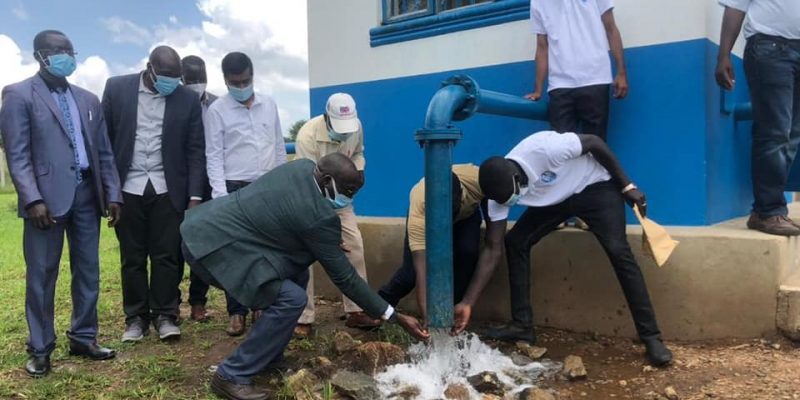 The new water supply system has been operational since September 3rd, 2021. The system, located in Moyo Municipality, was built by Reddy’s Borehole and Technical Services. The company, based in the Ugandan capital Kampala, specialises in the construction of water wells.

Bright Technical Services supervised the work, which involved the construction of two boreholes in Pamoju 1 and Pamoju 2 and a submersible pump. The water pumped from the water table passes through transition pipes to fill two steel tanks with capacities of 300 m3 and 164 m3. Distribution and intensification pipes have also been laid to supply the local population. “At least two blocks of six-station drainable latrines have also been constructed at Moyo Boys Primary School, as well as a 13-stall toilet with septic tank,” says Reddy’s Borehole and Technical Services.

In all, 28,500 people are receiving safe water in 39 villages in Moyo Municipality. The Ugandan Ministry of Water and Environment, which initiated the drinking water project, received funding from the German development agency Kreditanstalt für Wiederaufbau (KfW) and the Ugandan Treasury. The Ugandan Ministry of Water and Environment is entrusting the operation and maintenance of the new water facilities to the National Water and Sewerage Corporation (NWSC). The state-owned company, founded in 1972, is headed by Silver Mugisha.