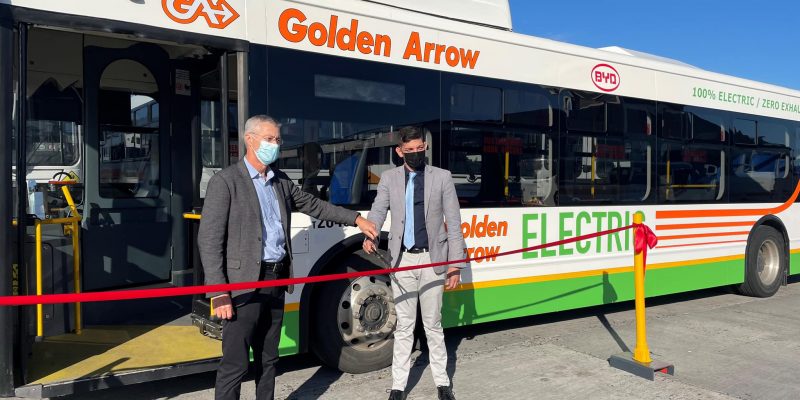 Golden Arrow Bus Services (Gabs) is breaking new ground in public transport in South Africa. The company has put two electric buses on the road in Cape Town. This was done at a ceremony recently in the presence of Daylin Mitchell, the Western Cape Minister of Transport and Public Works. The new buses, which are being rolled out, were developed in a partnership between Chinese car manufacturer BYD and uYilo, which is providing the financial part.

The launch of the new buses was preceded by a one-year test period. “During the first few months, we tested the buses in various circumstances, without passengers. The aim was to find out exactly how the vehicles would perform before integrating them into our operations. The testing of these vehicles has been a joy for everyone involved in the project. Every time we do a new test or reach a new milestone, the excitement level increases,” says Gideon Neethling, an engineer at Gabs.

The new electric buses now run between the suburb of Retreat and the city centre of Cape Town. The service includes an electronic smartcard fare system, which is already in use in several sub-Saharan African capitals, including Yaoundé in Cameroon and Kigali in Rwanda with the Tap & Go system. The electric buses are part of a fleet of 1,000 buses belonging to the provincial Ministry of Transport and Public Works, managed by Gabs.

The company, headed by Francois Meyer, transports at least 250 000 people a day in a large part of the Cape Town metropolitan area. Gabs also aims to reduce its carbon footprint by focusing on electric mobility. The company has already been committed to sustainability since 2017, equipping its facilities with two small solar photovoltaic plants of 25 kWp each.