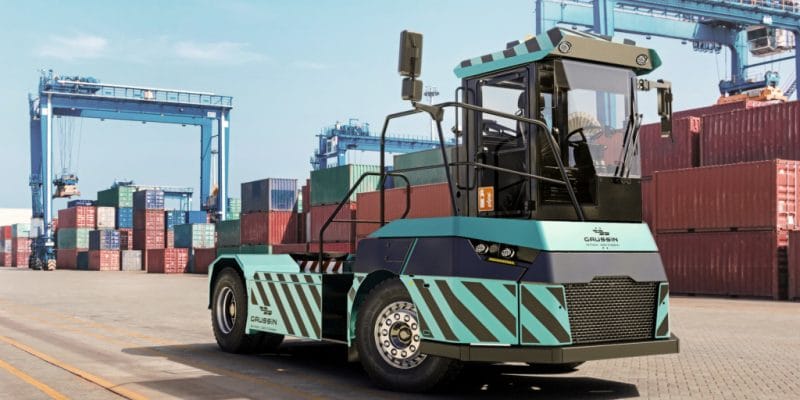 Bolloré Ports has announced the forthcoming acquisition of two electric tractors and a multi-charge station to equip the container terminal of the port of Freetown in Sierra Leone. This equipment will be supplied by the French engineering company Gaussin.

In Sierra Leone, electric tractors will soon be moving containers at the port of Freetown. This is the goal of Bolloré Ports, which manages its container terminal. The Bolloré Transport & Logistics Corporate subsidiary has just ordered its equipment from Gaussin. The engineering company based in Héricourt (France) will supply APM75T HE machines equipped with LMP (lithium-ion polymer) batteries.

These batteries provide higher specific energy than other types of lithium batteries and are used in applications where weight is an important feature, such as mobile devices, radio-controlled aircraft and some electric vehicles. The APM75T HE tractors are co-developed with Bolloré Ports and “Powered by Blue Solutions”. “The success of this French partnership is also proof that pooling skills to combat the effects of global warming can lead to concrete actions to effectively and sustainably fight against this phenomenon while improving operational performance,” says Philippe Labonne, Chairman and CEO of Bolloré Ports.

According to Bolloré Ports, the acquisition of this new equipment is part of the Green Terminal labelling process launched in June 2021 with the objective of gradually decarbonizing the transport of containers and rolling vehicles in its port terminals. This approach, which covers all environmental concerns, is based on a methodology broken down into eight fundamental pillars. The entire process, from the definition of the project to the conduct of audits, has been validated by Bureau Veritas, a specialist in testing, inspection and certification.

“The implementation of the Green Terminal labelling process is continuing in the network operated by Bolloré Ports. This new acquisition to equip Freetown Terminal will enable us to significantly reduce our greenhouse gas emissions and improve our productivity thanks to the technology developed in synergy with Blue Solutions and Gaussin,” said Olivier de Noray, Managing Director of Ports and Terminals at Bolloré Ports.

In addition to reducing the CO2 emissions of the vehicles operating in the container terminal of the port of Freetown, these electric tractors will save energy while reducing noise pollution.