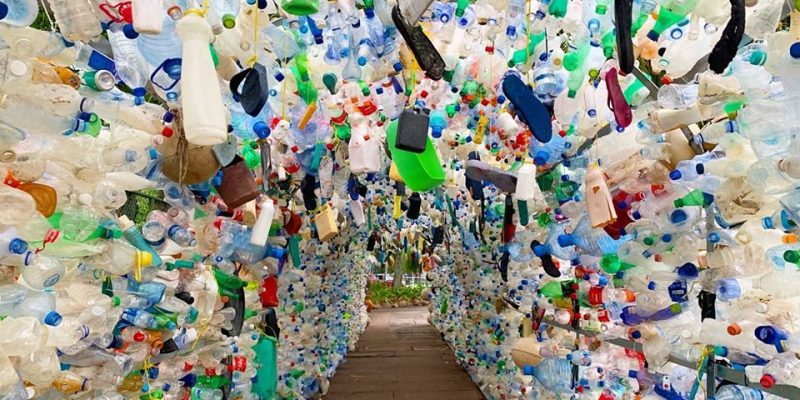 A plastic ocean arch has recently been erected in Victoria, the capital of the Seychelles, to show the consequences of ocean pollution. This creation is the work of Ocean Project Seychelles, a non-governmental organisation (NGO).

Seeing the plastic ocean arch in Victoria, the capital of the Seychelles, one would think it was designed to please art lovers. Yet the reality lies elsewhere. The plastic ocean arch is in fact a tool to raise awareness against ocean pollution. It was recently erected in the city of Victoria by the Ocean Project Seychelles, a non-governmental organisation (NGO). “The artwork gives (…) a glimpse of what marine creatures can feel when their natural habitat is covered in plastic. It is hoped that this initiative will encourage people to be more aware of their plastic consumption and replace disposable plastic items with reusable alternatives,” says Ocean Project Seychelles.

The Seychelles Archipelago is made up of 115 islands in the Indian Ocean off the coast of East Africa. It is home to numerous beaches, coral reefs and nature reserves, as well as rare animals such as the giant Aldabra turtles. These are affected by the consumption of plastic debris. According to calculations made by a team from the Seychelles Islands Foundation and Queen’s College of Oxford University (England), there could be as much as 1000 tons of plastic through Aldabra, a Seychelles atoll in the western Indian Ocean.

Where does the plastic waste used for the ark come from?

The plastic ocean ark installed in Victoria was mainly made from plastic materials (flip-flops, bottles, cans, balloons, shoes, bags…). The plastic waste was collected during an expedition led by the team of the NGO Ocean Project Seychelles on eight of the country’s outer islands. “A total of 10.56 tons of waste were collected during this expedition. We used some of it to create the ark,” says the NGO.

Ocean Project Seychelles has been raising awareness of plastic pollution in the country since 2016. Before the construction of the plastic ocean arch in Victoria, the NGO was already organising regular clean-up sessions around the beaches of the Seychelles Archipelago.