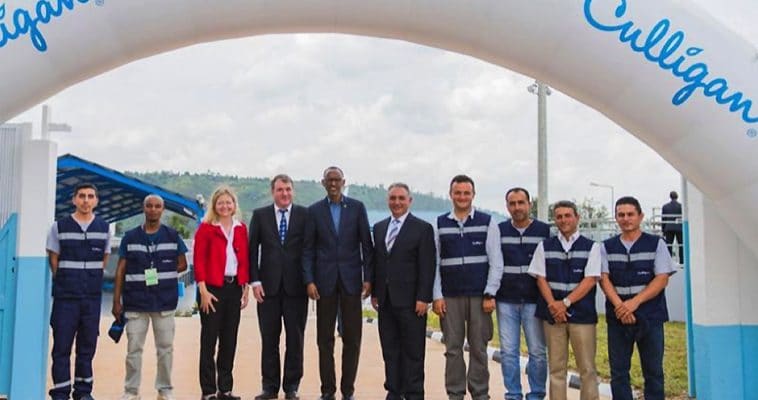 The Government of Rwanda has recently inaugurated the Nzove I and II drinking water plants. Both projects were developed by Culligan International East Africa and Central Asia, a subsidiary of Culligan, an American company specialising in water treatment.

Good news for the inhabitants of the city of Kigali, the capital of Rwanda. Two drinking water plants have recently been set up in the centre of the country. These are the Nzove I and II plants. They were recently inaugurated in the presence of Edouard Ngirente, the Rwandan Prime Minister. The project was carried out by Culligan International East Africa and Central Asia, a subsidiary of Culligan, a water treatment company based in Rosemont, near Chicago, USA.

The work at the Nzove I and II drinking water plants required a total investment of $40.2 million. According to the Prime Minister of Rwanda, with these two drinking water plants, the capital’s inhabitants will be self-sufficient in water. With a population of almost one million, Kigali needs an average of 143,668 m3 per day. However, the two plants, which have just been commissioned, increase water supply from 95,000 m3 to an average of 160,500 m3 per day.

The projects are being completed as the city of Kigali prepares to host another drinking water plant. It is currently under construction as part of a public-private partnership (PPP) by Kigali Water Limited (KWL), a subsidiary of Metito, a company based in the United Arab Emirates. The plant will produce 40,000 m3 of drinking water per day to supply 50,000 people in Kigali. It is expected to be commissioned in 2020. The opening of water production to private investment is projected to lower the cost of access to water in Rwanda. The Rwanda Public Services Regulatory Authority (Rura) has set at 710 Rwandan francs (71 cents) the price of water, for a household consumption of between 5 and 20 m3 per month.