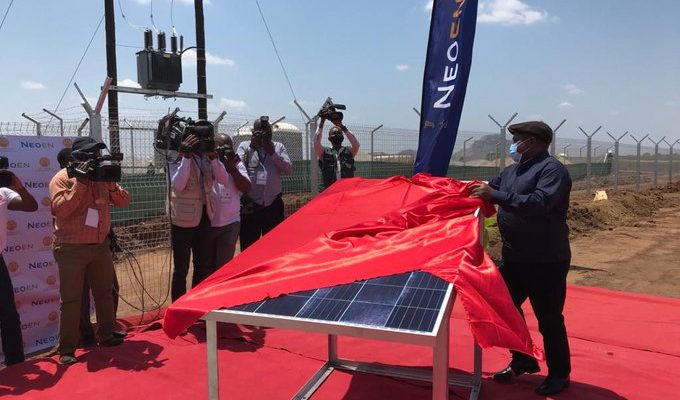 French independent power producer (IPP) Neoen has just launched the construction of its Metoro photovoltaic solar power plant in the Cabo Delgado province in north-eastern Mozambique. With an expected capacity of 41 MWp, the project is financed by Proparco, the private sector arm of Agence Française de Développement (AFD). The works are being carried out by the Portuguese company Efacec Power Solutions.

The launch of construction work on the Metoro photovoltaic solar power plant was the occasion for a ceremony attended by the President of the Republic of Mozambique on Friday October 23rd, 2020. Filipe Nyusi was assisted by David Izzo, the French ambassador to eSwatini and Mozambique. The presence of this French diplomat is linked to the fact that the Metoro solar project is being developed by the Paris-based company Neoen in France.

The Independent Power Producer (IPP) is developing the Metoro solar project with its partner Electricidade de Moçambique (EDM), within the framework of a Public Private Partnership (PPP) signed with the Mozambican authorities responsible for energy issues.

Neoen has entrusted the construction of the solar power plant to Efacec Power Solutions. The company, based in Porto in Portugal, will build the installation on a 138-hectare site in the Cabo Delgado province in north-eastern Mozambique. All the solar panels installed on the site will have a capacity of 41 MWp. The electricity will transit through a substation of the public company EDM, via a high-voltage line to be built by Efacec.

The electricity produced by the Metoro solar power plant will be sold to EDM on the basis of a 20-year power purchase agreement (PPA). The power of the park is capable of powering 175,000 Mozambican households while avoiding the emission of 49,000 tons of CO2 per year. As part of its renewable energy project, Neoen has received €40 million in funding from Proparco. The private sector arm of Agence Française de Développement (AFD) estimates that the new power plant will reduce Mozambique’s greenhouse gas emissions, thus contributing to the fight against climate change.

The environmental and social benefits of this project will also be significant, “particularly for the inhabitants of Cabo Delgado province” where 135 000 people could be electrified. “France, through the Agence Française de Développement group, is very proud to participate in the financing of the construction of this solar power plant. It is important to specify that the loan from AFD and Proparco includes a concessional tranche, authorized thanks to the financial effort made by the French State, in order to optimize the proposed tariff and support locally the positive environmental and social benefits of this project”, said David Izzo, France’s Ambassador to Mozambique and eSwatini.