MALI: Odial Solutions to distribute drinking water to 264,000 in 11 municipalities

Through its subsidiary Uduma Mali, the Odial Solutions group will soon provide drinking water to 264,000 people in Mali. The French company has just signed agreements to this effect with 11 municipalities located southeast of the capital Bamako.

A large part of the inhabitants of the city of Sikasso in southern Mali will soon be freed from drinking water problems: the French company Odial Solutions (Vergnet Hydro holding company) has just committed itself to providing drinking water services, through its local subsidiary Uduma Mali, with representatives from 11 municipalities. The signing took place on Friday, November 9, 2018 in Bougouni, a town located in the circle (corresponding to the department) of the same name, in the Sikasso region.

The specifications of Uduma Mali

“The signing of these contracts marks a milestone in this project, the last step before the rehabilitation, equipment and commissioning of the water points,” explained Nicolaas Van Der Wilk, Uduma Mali’s operations manager. The company will gradually be responsible for managing 1,400 hand pumps installed in all the municipalities concerned. 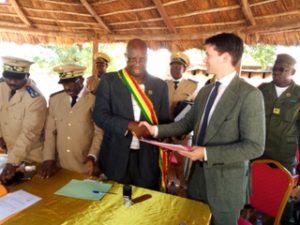 The partnership will last for 15 years©Uduma Mali

Uduma Mali has indicated that it intends to renovate some of the damaged pumps by repairing or replacing them. The company will transform the drinking water infrastructure into an “e-pump”, i. e. running with connected motors that will make it very easy for residents to pay their water bills.

The project has been approved by the Malian authorities, including the Ministry of Energy and Water. The company will operate under the supervision of the Regional Hydraulics Directorate (DRH). The project, which is expected to employ several dozen people, will have a total cost of CFAF 3.3 billion, or €5 million. Uduma Mali has invested 1.3 billion CFA francs, the equivalent of 2 million euros. The rest comes from international funding.