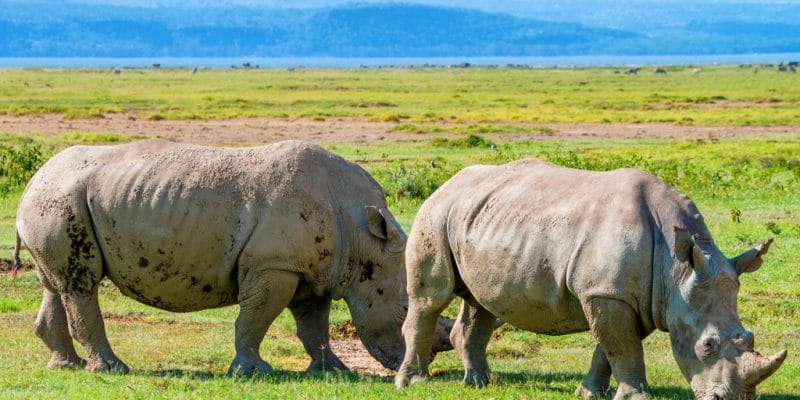 At least 17 black rhinos have arrived in Malawi where they have been released into Liwonde National Park. They were brought from South Africa to participate in a programme to conserve the endangered species.

Liwonde National Park welcomes new pachyderms. They are 17 rhinos caught in KwaZulu-Natal province, South Africa. The transfer project is led by African Parks, an organisation based in Johannesburg, South Africa, which manages several national parks on the African continent. She is working on this project in collaboration with the Department of Wildlife of the Governments of Malawi and South Africa, as well as WWF (World Wildlife Fund) South Africa.

After their capture, the 17 rhinos were placed in quarantine in the Hluhluwe-Umfolozi reserve. The big mammals spent six weeks in this protected area in KwaZulu-Natal. They were then transported to King Shaka Airport in Durban, where they boarded a flight to Lilongwe. And so it was from the capital of Malawi that the 17 rhinos began the final phase of their journey to Liwonde National Park, located more than 300 km away.

The transfer of the 17 rhinos from South Africa to Malawi is on time, at the beginning of the rainy season. Pachyderms will benefit from regenerated vegetation after a devastating dry season in several parts of the country. In their new living environment, which extends over 548 km2, they will meet elephants, antelopes, zebras, or even hippos. Crocodiles will be watched for before they drink from the streams that cross the park. Cats like lions lurking in the bushes, who never miss an opportunity to attack a young rhino, will also be watched out for.

The main threat, however, will not come from felines that hunt for food, but from men. Poachers kill rhinos to seize their horns that are sold on the black market in Asia. They are used in the traditional pharmacopoeia of this region of the world. African Parks therefore have every interest in increasing vigilance in Liwonde National Park.

“Extensive measures to protect these animals include aerial surveillance, daily patrols by forest rangers and the integration of the most advanced technology to enable real-time monitoring,” said Peter Fearnhead, Executive Director of African Parks.

A species in danger of extinction!

The transfer of the 17 black rhinos from South Africa to Malawi is a feat that is part of the conservation programme for the eastern part of the species. “Our shared vision is to strengthen Malawi’s current rhino population and support regional efforts to conserve this critically endangered species,” says Peter Fearnhead.

He adds: “We are also moving two of the existing Liwonde rhinos to the Majete Wildlife Area, as well as another Majete rhino to Liwonde, all to improve genetic diversity in these two parks and create a healthy rhino population in Malawi”. The reproduction of the 17 black rhinos could lead to the repopulation of other national parks and reserves in Malawi, and even in the entire sub-region. Currently, only 5,500 black rhinos still live in wilderness on the African continent.

COTE D’IVOIRE: Building up a force to combat deforestation