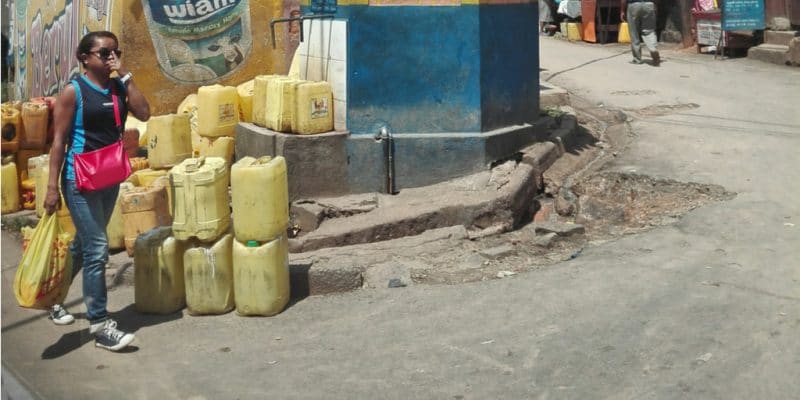 More than a hundred water tanks have been installed throughout the Malagasy capital, Antananarivo. This emergency measure was adopted by the Malagasy government and the municipal authorities in order to respond to the shortages of drinking water, which have been exacerbated by relentless drought.

The great south of Madagascar is experiencing record drought. “In 60 years, we have never seen the water sources dry up. We are obliged to ration our water consumption. We open the water for one hour in the morning and one hour in the evening from 5 to 6 pm” says Sister Damien Kœnig, in charge of the humanitarian programme in Iléna, located in the south-east of the big island. Not a single drop of rain has fallen around here since October 2020. The natural water sources have almost dried up, and in the capital, some neighbourhoods have not seen water running from the taps for weeks.

As a temporary response to this water shortage, the government and the municipal authorities of Antananarivo have undertaken to supply the population with water from cisterns. “For big cities like Antananarivo, as there is no water at the neighbourhood level, we are setting up cisterns with deliveries and water supply systems by tanker truck,” explains Voahary Rakotovelomananstoa, Madagascar’s Minister of Water. There are some 120 blue cisterns, of 10,000 litres each, installed next to the usual standpipes.

The long drought has only aggravated the lack of drinking water in Madagascar. Access to drinking water is still a luxury for the majority of the population of this east African country. According to figures published in 2017 by the NGO Wateraid, only 50% of Malagasy people have access to drinking water in urban areas. In the communes on the outskirts of Tananarive, water is accessible for only two hours a day. This situation is due to the small quantity of drinking water produced and the dilapidated distribution infrastructure. According to official figures, the capital’s water needs currently stand at 300,000 m3 per day, while Jirama, Madagascar’s national electricity and water company, produces only 200,000 m3 per day.

But this situation should not last much longer. In 2017, the government has provided Jirama with a budget of around €200 million, intended for the rehabilitation of water infrastructures and the construction of new water networks on the island. It is within this framework that six stations producing between 24,000 and 40,000 m3 of water per day are being built in Antananarivo.

ZAMBIA: EU to subsidise renewable energy to the tune of $23 million