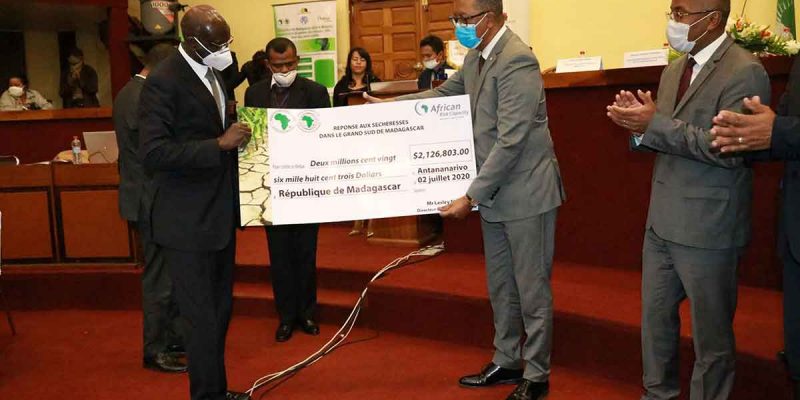 Madagascar has recently obtained funds to support its drought-affected populations. The 2.13 million dollars have been allocated by the Insurance Company of the African Risk Capacity (ARC), in partnership with the African Development Bank (AfDB). The funds allocated by payment from the ARC represent the premium of a drought insurance policy taken out by Madagascar through the AfDB’s African Disaster Risk Financing Initiative (ADRiFi). The institution financed the entire premium for 2019-2020 for the sovereign transfer of drought risk for the Big Island.

The ADRiFi programme was launched in 2018 by the AfDB with the objective of preventing and better responding to disasters, revisiting national and sub-national adaptation measures to protect the environment. The programme also aims at enhancing the capacity of stakeholders to assess risks and expenditures related to climate change.

The partnership agreement between the AfDB and the ARC was signed in May 2016 with a view to collaborating in the areas of planning, preparedness and response to weather events and natural disasters for the benefit of AfDB Group member countries. It is also part of this collaboration that the Bank Group is providing US$ 2.13 million to the Government of Madagascar.

On the big island, the funds will help protect 600,000 vulnerable people affected by climatic disasters, including drought, which affected harvests last season. According to the AfDB, interventions will focus on cash transfer under the CFW (“cash for work”) scheme for 15,000 vulnerable households, nutritional support for 2,000 children under 5 years old and water supply for 84,000 households.

“The compensation payments made by the ARC to support the drought-affected population in the far south of Madagascar were made possible by the leadership and commitment of the Government of Madagascar to protect its population,” said the UN Assistant-Secretary-General and Managing Director of the African Risk Capacity (ARC), Mohamed Beavogui. “We also thank the African Development Bank for its commendable support through the ADRiFi programme. This demonstrates that collaboration between African governments and development partners can safeguard development gains on the continent,” he added.

The African Risk Capacity (ARC) and African Development Bank (AfDB) initiative will support the people of the far south of Madagascar who are still suffering the consequences of the recent drought episode. In February 2020, Afrik 21 reported on the situation in that part of the Indian Ocean Island. The last dry season was particularly severe in the Androy and Anosy regions. According to the Food and Agriculture Organization of the United Nations (FAO) and the Madagascan Ministry of Agriculture, 500,000 people were affected by this drought episode.