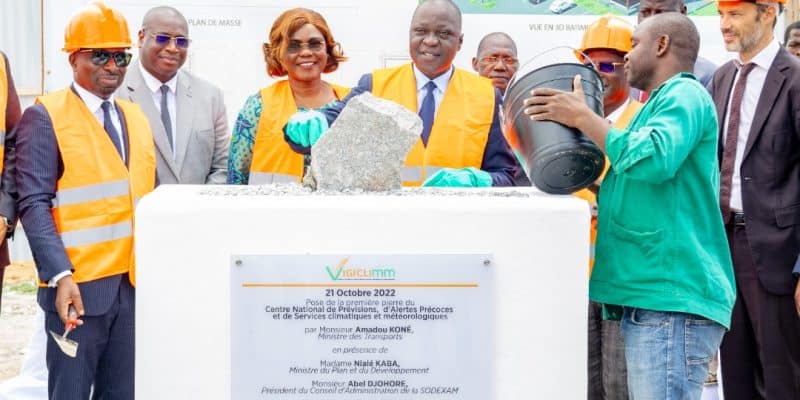 The Ivorian government is launching the construction of the Centre for Forecasting, Early Warning and Climate and Meteorological Services. This construction is part of a system that will allow Ivory Coast to improve its meteorological services in response to climate change.

The project of modernization of the system of Vigilance, warning and climatic and meteorological services to users (VIGICLIMM) is now on track. The project activities were launched on Friday, October 21, 2022 at the headquarters of the Société d’exploitation et de développement aéroportuaire, aéronautique et météorologique (SODEXAM) in Port-Bouët, a municipality of Greater Abidjan. It was in the presence of Ivorian authorities, as well as officials from the French Development Agency (AFD), Meteo France International (MFI).

This crucial project in the face of climatic hazards includes the construction of the Center for forecasting, early warning and climate and weather services whose groundbreaking ceremony took place in the wake. The center is built under a public-private partnership (PPP) signed between Sodexam and MFI. The structure will house the Regional Maintenance and Calibration Center and the specialized teams of the National Meteorological Department.

“The Vigiclimm project is in line with our country’s constant commitment over the past decade to play a full role in the fight against disaster risk reduction, the dissemination of meteorological and climatic services for the resilience of socio-economic sectors in the face of climatic risks, the fight against global warming and the fight against land desertification, in the restoration of environmental balances essential for the future of the planet, in the promotion of more efficient and intelligent agricultural models, in the face of climatic, demographic and economic challenges,” said Amadou Kone, the Ivorian Minister of Transport at the ceremony to lay the foundation stone of the Center for forecasting, early warning and climate and weather services.

In addition to the opening of this center, MFI will supply and install 17 new weather information collection stations throughout the country. The company, based in Toulouse, France, will also support the Ivorian government in the deployment of tools to disseminate real-time weather information to the general public and sensitive economic sectors, including agriculture and transportation.

The implementation of Vigiclimm is supported by the World Meteorological Organization (WMO) within the framework of the Climate Risk Early Warning Systems (CREWS) initiative implemented by the United Nations (UN) in 19 African and Pacific countries. The Ivorian government’s project is being implemented with a loan of 18.4 billion CFA francs (28 million euros) from AFD. Vigiclimm’s activities will be spread over three years.