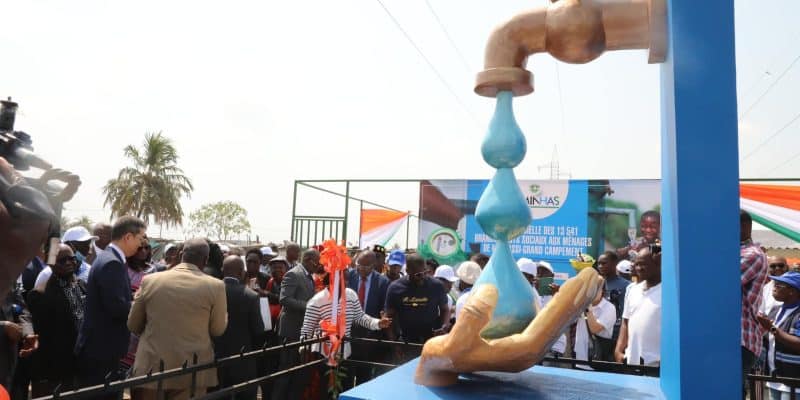 As part of its "Water for All" program launched in 2019, the Ivorian government is making 13,541 social connections to improve the supply of drinking water to people in the council of Koumassi located in the Autonomous District of Abidjan.

Improving access to drinking water in urban and rural areas. This is one of the main challenges facing the government of Ivory Coast in 2023. Thus, the authorities of this West African country have recently made 13,541 connections to the drinking water network in the commune of Koumassi located in the economic capital Abidjan.

The work, financed to the tune of 3 billion CFA francs (about 4.5 million euros) by the Korea International Cooperation Agency (KOICA), will enable the “supply and installation of a distribution network of about 38 km”, according to the Ivorian Minister of Water, Sanitation and Hygiene. Eventually, 81,246 people in the Grand Campement district will be connected to the national drinking water network.

“The social connections reduce the cost of the subscription, which is set at 10,000 CFA francs (15 euros) compared to 167,000 CFA francs (253 euros). This project will prevent people from having to buy drinking water from resellers because the supply of drinking water to towns is a key factor in economic development and public health,” explained Minister Bouaké Fofana.

Ivory Coast plans to provide universal access to drinking water for its 28 million inhabitants by 2030. To this end, several initiatives are currently being implemented in the country, including the drinking water supply project in Abengourou, an eastern city with a population of 207,000. The work, led by the National Drinking Water Office (ONEP), is being carried out in partnership with the Abidjan-based company Arc Ingénierie. The infrastructure is already operational, allowing 22,000 m3 of water to be pumped from the Comoé River every day for treatment and distribution via a water tower with a capacity of 1,000 m³.

At a total cost of 25 billion CFA francs (about 38 million euros), financed by loans from the Arab Bank for Economic Development in Africa (BADEA) and the Saudi Fund for Development (SDF), the Abengourou project will be completed by 2024 with the laying of 42 km of pipes in the town and 32 km of pipes in the surrounding localities, including Ettienkro and Kodjinan.

Read also- IVORY COAST: the State is reinforcing water supply in the cities hosting the 2023CAN

At the same time, the project to improve the technical and financial performance of the drinking water sector (APTF) is continuing in Ivory Coast thanks to the funding of 182 billion CFA francs (276.5 million euros) allocated by the government. In the Autonomous District of Abidjan, the second phase, which began in the second half of 2022, should continue from 2023 with the installation of 800 km of the distribution network. This project will provide an additional 30,000 m3 of water per day to the distribution network.