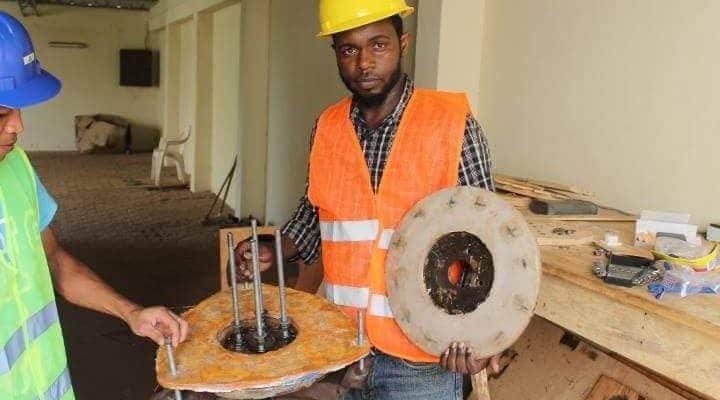 He is one of the young people who are moving the African continent. Yee Mamadou Bah, in his late thirties, with two partners have set up Eol-Guinée, a company specialising in the supply of electricity from wind energy in Guinea. The start-up company designs and manufactures mini-wind turbines using local materials. Wood, a disc, magnets and conducting wires are the essential elements used by this former agricultural engineer to design his wind turbines.

The system rotate with the help of winds at very low speeds and require virtually no maintenance. “Our wind turbines are simple, but very robust. These are wind turbines that can operate virtually maintenance-free. The blades we design with wood can turn for five years and must be changed afterwards,” said the young entrepreneur in an interview with the Guinean radio and television station.

These wind turbines have a capacity that varies from 1 to 3 kV. Eol-Guinée offers its services to hospitals, mosques, churches, schools, households, etc. Wind turbines are designed for domestic and industrial use. The company also offers those with limited means the possibility of renting wind turbines for a specific period of time.

“Thanks to a well-designed technology, our wind turbines are adapted to the different energy needs of our developing countries,” said the CEO to Startup.info. Their products are also marketed in Cameroon, Togo and Madagascar. As a result of this expansion, they achieved an annual turnover of 27,000 euros in 2019.

At the beginning of the adventure, Yee and his companions made drones. “One day we had to go on television about one of these drones, but we couldn’t watch the show, just because we were in the dark, because of a power outage? That day, we thought, why not transform this knowledge into a public utility by providing basic lighting to the Guinean population? ”, explains the young entrepreneur. And it was this questioning that finally led to the creation of Eol-Guinée in 2009, as well as the commissioning of the very first wind turbines. This is how the adventure began, thanks to which Yee Mamadou will be part of the top list of 35 young Africans who have moved the francophone region in 2017, according to the International Organization of La Francophonie (OIF).