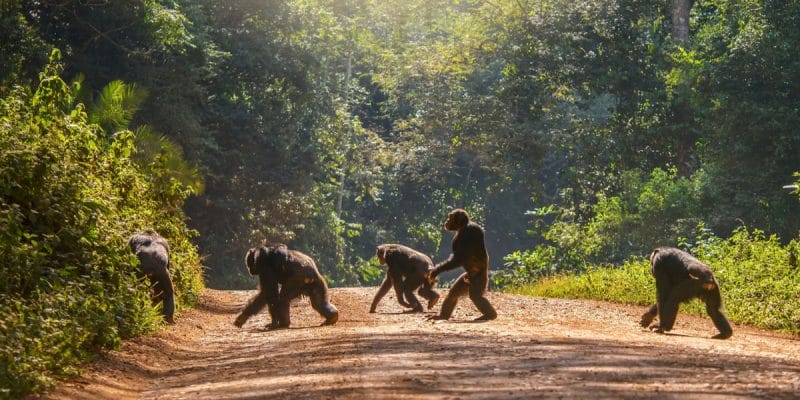 Bauxite mining is growing rapidly in the Boké region of northwestern Guinea. In just a few years, the activity has propelled Guinea to the rank of the world's third-largest bauxite producer. The rush for red gold is not without risks. It destroys the natural environment, as well as the living environment of humans and chimpanzees. Nearly 2800 individuals of the endangered great apes could perish if nothing is done.

In Guinea, the rapid expansion of bauxite mining in Boké, supported by the growing global demand for aluminium, is increasingly being opposed by local populations. In Guinea’s largest mining region, civil society actors denounce land expropriation and environmental destruction. “When companies set up, they take over land, sometimes without compensation for the area lost. After the eviction operations, a large part of the farmers inherit smaller plots than those they have been forced to leave.” Said Pascal Tanguiano, Director of the International Trade Centre for Development (Cecide).

The evidence contained in a complaint filed in March 2019 by Cecide and a collective of 13 villages in the Boké region. The complaint is filed with the World Bank’s Office of the Ombudsman and is directed against the International Finance Corporation (IFC). The latter is accused of having aggravated the negative impact of mining activity in Boké, through a €135 million loan it granted in 2016 to the Guinean Bauxite Company (CBG) the main mining company in the region, 49% owned by the State and 51% by Rio Tinto and Alcoa. In the meantime, the CBG has certainly contributed to the creation, a year ago, of the Bauxite Environment Network (BEN), a platform for exchange and collaboration on good environmental and biodiversity practises, to better mitigate the cumulative impacts of mining activities. But concrete and effective measures are still awaited…

Knowing that, according to information from Reporterre, the IFC’s contribution had a leverage effect and “$473 million was borrowed from a consortium of commercial banks: Société Générale, BNP Paribas, Crédit Agricole, Natixis, the German branch of ING Bank (ING-DiBa AG) and two Guinean banks, SGBG and Bicigui. ”It is not impossible that French institutions may one day have to report to France on the human rights impacts of the infrastructure they have financed in Guinea, in accordance with the 2017 law on the duty of vigilance. Knowing that the movement in this direction is beginning to spread in Europe. Germany is also considering a law on the duty of care and the United Kingdom Supreme Court has just decided that the Vedanta mining company will be sued in London for the pollution of its subsidiary in Zambia.

Chimpanzees are no exception

Meanwhile, Guinea is home to about half of the chimpanzees of West Africa, an endangered species in the world. Most of these primates are housed in the Middle Baffin National Park in Boké, which has nearly 5,300 chimpanzees.

Apes are not immune even in this place dedicated to their preservation. According to the Wild Chimpanzee Foundation (WCF), the presence of a bauxite mine and a 294-megawatt hydroelectric dam, planned within the protected area, threatens 2,800 of these apes.

Primatologists fear that the West African region will lose its main centre for the preservation of great apes. The population of Western chimpanzees (Pan troglodytes verus) has decreased considerably over the last three decades. The number of specimens is currently estimated at about 53,000, compared to about 175,000 in 1990. “We lost our lions in West Africa. The chimpanzee population has declined over the past 20 years. I fear that if we do not do more in terms of conservation in West Africa, we will lose them completely,” says Abdul Tejan-Cole, campaign director of the environmental group Mighty Earth.

The IFC, a subsidiary of the World Bank, which is therefore accused of financing mining activities in Guinea that affect humans and the environment and is also being challenged by a German media group for its investments in hydrocarbons, when the World Bank is struggling to engage in the energy transition by financing renewable energies. At a time of global threats to climate and biodiversity, it seems a little obsolete to see some international institutions and global groups imagine that they can escape their global responsibility indefinitely.