Homepage » GABON: The ivory storage site of the Lambaréné court is the target of a burglary 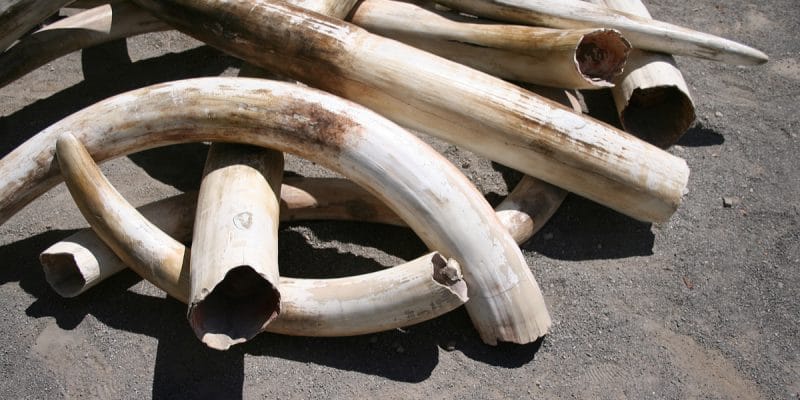 In the town of Lambaréné in western Gabon, three alleged wildlife traffickers have just fallen into the net of the judicial police. They were arrested in possession of approximately 81 kg of ivory. The loot was stolen from the ivory storage warehouse of the Lambaréné court of first instance.

The recent operation against wildlife trafficking in the town of Lambaréné in western Gabon was successful. On 23 June 2022, a trio of alleged wildlife traffickers were arrested. All Gabonese nationals, the suspects were preparing to sell six whole elephant tusks as well as seventeen pieces of ivory tips and a panther skin carefully stored in suitcases and travel bags, when they were apprehended. The total weight of the catch was around 81 kg of ivory.

Curiously, the marked ivory pieces, according to the defendants, came from the seals of the Lambaréné court of first instance. With the help of two accomplices working for this court, the alleged traffickers are said to have robbed the storage warehouse of the seized ivory pieces.

The success of this operation was due to the joint intervention of the judicial police, the General Directorate of Wildlife and Protected Areas (DGFAP) and the Provincial Directorate of Water and Forests, supported by Conservation Justice, a non-governmental organisation (NGO) working for the application of the wildlife law.

The vulnerability of ivory storage sites

The alleged traffickers will have to answer for the possession and attempted sale of trophies of fully protected species. They were taken into custody at the Lambaréné judicial police station pending their presentation to the Special Prosecutor’s Office in Libreville. The latter has been dealing with this type of case for the past three years, with the result that 80-90% of the ivory traffickers arrested have been sentenced to prison terms of up to 10 years for ivory trafficking.

Cases of wildlife trafficking involving law enforcement officers are becoming a concern in Gabon. “These organised networks in the various types of lucrative trafficking must be firmly combated, as they can dramatically erode the rule of law by diverting certain servants of the law from their prerogatives and duties,” explains Conservation Justice in a note.

Read also-GABON: The judicial police, at the school of wildlife legislation and trafficking

The vulnerability of the storage sites for seized ivory and hunting weapons encourages ivory trafficking in Gabon. And in 2020, tips were stolen from the Lambaréné Court and tips from the Libreville Court were even seized in neighbouring Cameroon. In 2015, nearly 300 kg of ivory disappeared from the court in Oyem in the north of the country. The 2012 audit report on government ivory stocks states that ivory tusks registered at the Lambaréné court had disappeared. A year earlier in 2011, another report by the National Parks Agency revealed the disappearance of 17 ivory tusks from the Makokou court stockpile in the north-east of the country.