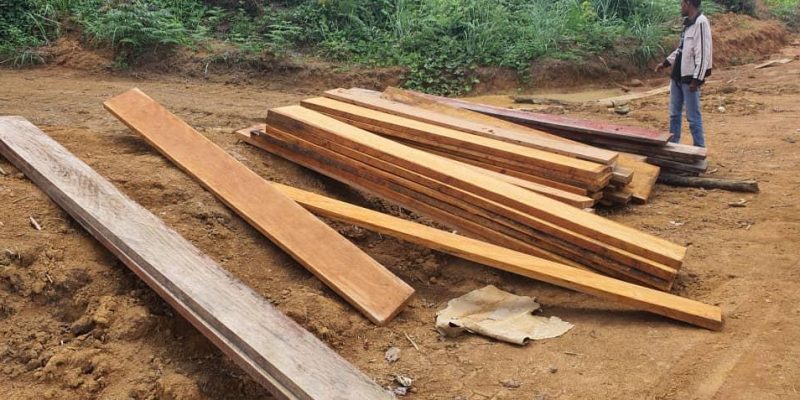 Several forestry investigations conducted between November and December 2022 in the town of Bitam in northern Gabon have identified four illegal logging sites. The main operators were interviewed by the deconcentrated Water and Forests administration to establish their responsibilities concerning the various violations of the forestry code that were observed

The joint team of agents from the Gabonese Ministry of Water and Forests and members of the nature protection organization Conservation Justice has just confirmed the existence of four illegal logging sites in several villages in the Ntem department. Equipped with various sawing tools, the perpetrators and their accomplices had no authorization from the administration, which led to the seizure of the machines and the cut wood. Those concerned were heard in Bitam by the Water and Forestry Administration to establish their responsibilities concerning the various violations of the forestry code that were observed.

It was on the Melen-Effack-Bibeigne axis that the mixed team made a first raid on a site exploited by Bekono, a Cameroonian national who is in Gabon illegally. During his interview at the Water and Forests headquarters, Bekono stated that he was the one who had cut down two of the four identified sites and that he worked for a police captain assigned to the Bitam police station. On the site, four trees were also found cut, but not yet worked on, as well as a pile of 203 laths and rafters. When questioned, the suspect arrested told the officers that the operation was carried out a month ago on this site. A raid at his home in the village of Effack-Bibeigne led to the seizure of a chainsaw as evidence. The police captain is known for the same acts in Bitam. He was therefore summoned by the Water and Forests Department to be heard based on a report, accompanied by his sawyer.

The captain recognized the facts of which he was accused and cleared the sawyer. He affirmed that the defendant was acting on his instructions.

In addition, after the first seizure of the cantonment, the inhabitants confirmed having seen a truck transporting the contentious wood out of the site at night. According to a police source who requested anonymity, these facts constitute a major breach of police ethics, which states that each police officer must act in full compliance with the law, be irreproachable, and set an example for the population.

The last two sites were illegally felled in the village of Essatop, where a national with a sawmill permit was operating an unauthorized site. In the village of Okoralene, two other people were heard following the procedure and sanctions provided for by the provisions of the forestry code given by the Water and Forestry Department of Bitam.

Read also-GABON: when beekeeping reduces community pressure on the forest and wildlife

The species found on the different sites are essentially Padouk, Belinga, and Dabema. Like all wood species, their exploitation requires the respect of legality, following the sustainable management of forests which is the subject of a national strategic policy for the Gabonese economy in coherence with the leadership of Gabon as a green model at the international level. Remember that sustainable forest management integrates economic, social, and ecological aspects. Failure to comply with the laws in this area would compromise Gabon’s stated ambition and threaten an indispensable natural resource for future generations.