EGYPT: the Fouka hotel turns to seawater desalination and “reuse 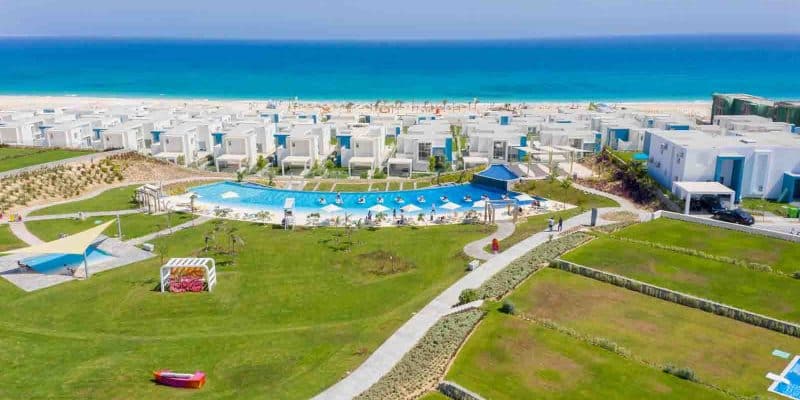 In Egypt, the Fouka Bay hotel complex, built by the Tatweer Misr company, will be equipped with two new stations, one dedicated to wastewater treatment and a second for the desalination of sea water. The water from these installations will be used for the operation of the establishment.

The mixed-use hotel complex, Fouka Bay, located in Ras El-Hekma on the northern coast of Egypt will soon be supplied with water from wastewater treatment and seawater desalination plants. The move, which is part of the third phase of the Fouka Bay project, was announced recently by the Egyptian company Tatweer Misr, which is behind the project.

A new desalination plant will supply 7,000 m3 of water per day to the complex. The technique used in the future installation will be reverse osmosis, which is based on the principle of salt-water separation using a semi-permeable membrane.

Commissioning of the facilities in 2023

At the same time, a wastewater treatment plant will be built at the Fouka Bay resort. The plant will have a daily capacity of 2,800 m3. “The treatment and desalination plants will consist of four units that will be installed in stages,” says Tatweer.

The future installations should guarantee the supply of drinking water to its residents and provide the necessary resource for watering green spaces by 2023, in a context marked by drought. With this climatic phenomenon, fresh water is becoming scarcer in Egypt. And the situation is expected to worsen with the construction of the Grand Ethiopian Renaissance Dam (GERD), which will reduce the flow of the Nile.

The Fouka Bay complex covers an area of 89 hectares with a special location on Ras Al Hikma beach, west of Alexandria. One of the most amazing aspects of Fouka Bay is that it is divided into 12 islands surrounded by crystal lagoons covering an area of over 20 hectares, making it one of the largest crystal lagoons on the northern coast. Fouka Bay was awarded the prize for the best resort in the Mediterranean by the Mediterranean Resort & Hotel Real Estate Forum. The entire Fouka Bay project, which also includes hotel flats and crystal lagoons, is scheduled for completion in 2026.