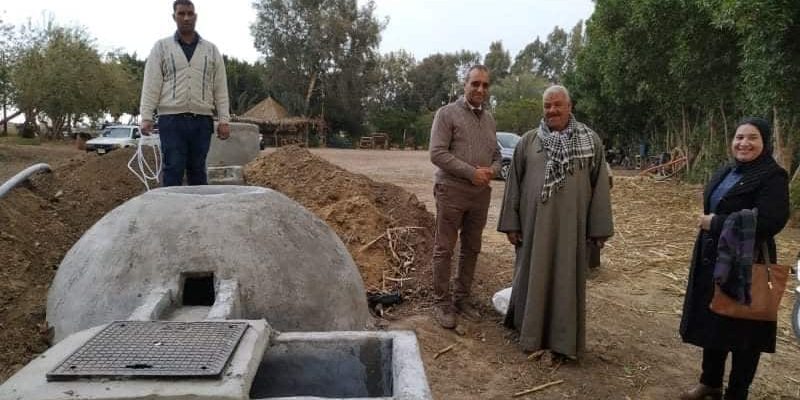 Some of the residents of Fayoum governorate in central Egypt use domestic biogas for cooking. The biogas is obtained from the fermentation of organic waste in four stations commissioned by the Egyptian Minister of Environment, Yasmine Fouad.

The project to establish 15 biogas production units in the villages of Fayoum governorate in central Egypt is on track. On January 18, 2022, the Egyptian Minister of Environment, Yasmine Fouad inaugurated four of the 17 facilities. These units provide a renewable energy source for households for cooking, reducing the use of fossil fuels, which emit carbon dioxide.

According to the Egyptian Ministry of Environment, one such unit alone produces the equivalent of five gas pot pipes each month from the fermentation of organic waste from agriculture and livestock. The new biogas production units commissioned in Fayoum are also used to produce an element-rich organic fertilizer that improves the properties of the soil, approximately 41 hectares of land per year.

For this first part of the project to create 15 biogas units in the governorate of Fayoum, the Egyptian government has received support from the Spirit of Life Association.

Similar projects are expected in other governorates

The Egyptian Ministry of Environment is also overseeing the construction of biogas units in Suhag governorate in Upper Egypt. Bioenergy for Sustainable Development is implementing the project, which involves the establishment of 61 biogas units, including 57 units to convert household waste, three for agricultural schools and one mobile educational unit. The company has signed a 1.5 million Egyptian pound (over $95,700) financing agreement with the National Bank of Kuwait (NBK) in June 2021.

The production of biogas in Suhag follows the success of a pilot project in the governorate of Minya. Initiatives that bring the Egyptian government closer to its 2030 goal of improving the quality of life of the Egyptian citizen through an economical and sustainable source of energy and supporting the efforts to implement the presidential initiative “a dignified life” for all Egyptians.