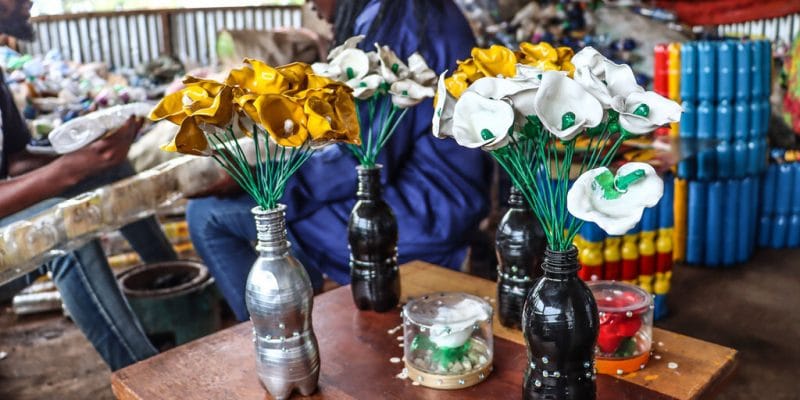 Between houses, paintings, baskets and other decorations, sustainable handicrafts are booming in the city of Bukavu in the Democratic Republic of Congo (DRC) thanks to the plastic waste recycling concept implemented by the start-up Plastycor.

Since its creation in 1901 by the Belgian colonial authorities, the city of Bukavu in the Democratic Republic of Congo (DRC) has been experiencing an unceasing demographic explosion. With an estimated population of 1.6 million in 2019, the capital of the province of South Kivu drags tons of single-use plastics through its streets.

While waste management is now a priority for the authorities of Bukavu, some people can no longer wait for concrete measures and are starting up recycling activities. This is the case of the start-up Plastycor launched in 2019 by Congolese entrepreneur Nicole Menemene. In just three years, the start-up has been making the rounds of the national and international press thanks to the originality of its masterpieces such as houses, flowerpots, armchairs, shelves, multipurpose baskets and walls that it makes locally from plastic.

A different vision of waste recovery

The start-up works with young volunteers to collect plastic bottles, bags and cans throughout the city. In 2020, about 18,000 plastic bottles were used by Plastycor in the construction of a house in the village of Katana, located about 43 km from Bukavu.

“The idea of creating Plastycor came to me because in other neighboring countries I was revolted to see people keeping their waste in their bags or in garbage cans, while in Bukavu, DRC, they were throwing it on the road. This made me angry because this waste clogs the gutters and invades Lake Kivu,” explains Nicole Menemene.

With a surface area of 2,700 km2, Lake Kivu is the main source of drinking water for the city of Goma in North Kivu and part of neighbouring Rwanda. However, it serves as a dumping ground for the plastic packaging and household waste that flows into it.

Read also- DRC: In Kinshasa, Albaryk will take over waste management in 2022

In this context, initiatives are multiplying in this Central African country. In 2020, the Congolese company Innovert launched a project to recycle plastics into paving stones in order to reduce the pollution of Lake Kivu. The initiative has already created jobs for young people in the region.