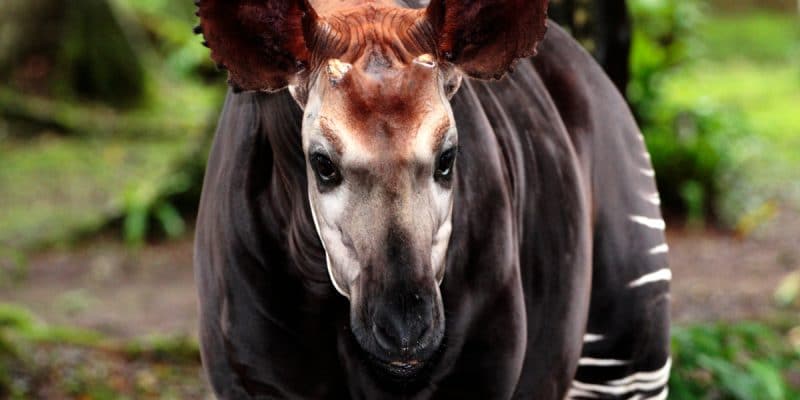 Two hundred and five environmental non-governmental organisations (NGOs) are calling on the DRC authorities to stop Kimia Mining from mining in the Okapi Wildlife Reserve in the north-east of the Democratic Republic of Congo (DRC). The Chinese company is accused of deforestation and destruction of wildlife in one of the DRC's four protected areas, which remain on the World Heritage in Danger list.

Congolese civil society is mobilising to get the government to dismantle the installations of the Chinese company Kimia Mining in the Okapi Wildlife Reserve, located in the north-east of the Democratic Republic of Congo (DRC). In an appeal launched on August 8th, 2021, 205 nature protection non-governmental organisations (NGOs) ask the Prime Minister and the Deputy Prime Minister and Minister in charge of the Environment and Sustainable Development to get involved and remind the Ministry of Mines of the terms of the law and the urgency of withdrawing the authorisation given to the company Kimia Mining, inside the Okapi Wildlife Reserve.

A decree signed on November 12th, 2012 by the Congolese Minister of Mines prohibits clandestine gold panning activities (the artisanal search for and exploitation of gold and related substances in waterways and former waterways) in the national territory’s wildlife parks and protected areas. However, any gold panning activity in wildlife parks and protected areas is subject to prior authorisation from the administrations in charge of mines, forests, wildlife, the environment and nature protection.

This is the nth time that Kimia Mining’s gold panning activities have been challenged in the Okapi Wildlife Reserve. In 2017, a group of experts from the United Nations (UN) also accused the Chinese company of gold trafficking with the complicity of several high-ranking officers of the Congolese army. “In addition to pollution and deforestation, the mines attract idle people. And to feed them, bush meat is needed, because the miners have to be fed, and they are targeted for extortion by armed militiamen and the military,” explained John Lukas, co-founder of the Okapi Conservation Project.

As one of four UNESCO World Heritage Sites in Danger in Congo, the Okapi Wildlife Reserve comprises nearly 670,000 hectares of mostly pristine rainforest. The reserve is inhabited by the indigenous Efe and Mbuti peoples. It is named after one of its most famous and secretive inhabitants, the Okapi (Okapia johnstoni). This mammal resembles the giraffe, but with a much shorter neck, has white and black stripes like the zebra, and a tongue that can grow up to 45 cm long. This animal was unknown to the Western world until British explorers and researchers confirmed the existence of this African unicorn in the early 20th century.