Homepage » COMOROS: In Moroni, UNDP and GCF launch a reforestation operation with the State

COMOROS: In Moroni, UNDP and GCF launch a reforestation operation with the State 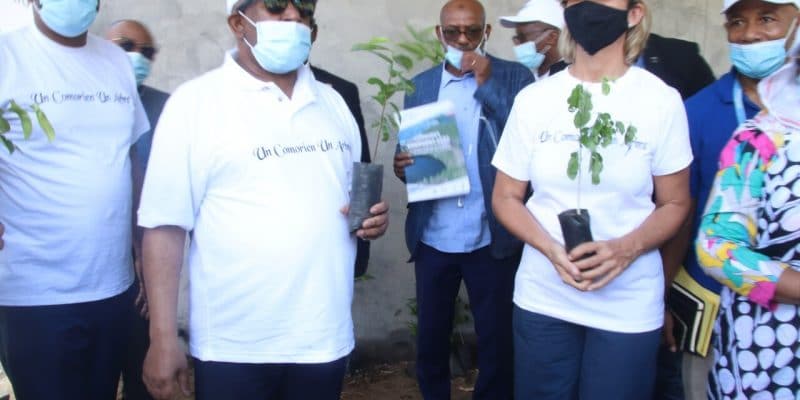 One Comorian, one tree. This is the name of a reforestation operation underway in the Comoros archipelago until 2025. This island country in East Africa, hit hard by the loss of its forest cover is trying to restore it with the support of several development partners such as the United Nations Development Program (UNDP) and the Green Climate Fund (GCF).

A few months after the 26th Conference of the Parties on Climate (COP 26) in Glasgow, Scotland, the President of the Comoros Azali Assoumani wants to honor his commitments to reduce carbon dioxide (CO2) emissions. To do this, a reforestation campaign has been launched for a period of three years, mainly in the islands of Ndzouani, Ngazidja, Moheli and Moroni the capital.

The operation called “One Comorian, one tree” is supported by the United Nations Development Program (UNDP) through projects on resilience to climate change jointly funded by the Green Climate Fund (GCF) and the Global Environment Facility (GEF).

With three quarters of the population dependent on rain-fed agriculture, the initiative aims to protect the archipelago’s watersheds and to realize the nationally determined contribution (NDC) on the 2015 Paris Climate Agreement. In this context, the island state’s partners stress that reforestation efforts will improve access to water and protect vulnerable ecosystems.

“Tree planting has multiple environmental and socio-economic benefits for the well-being of the Comorian people. This is why UNDP and other partners strongly support this government and community initiative. I was honored to accompany the President throughout the country for the launch of the national reforestation campaign,” said UNDP representative in Comoros, Fenella Frost.

Read also-AFRICA: An international agreement to stop deforestation by 2030

According to the governor, Mohammed Said Fazul, the islet of Moheli, so well known for its vast forest cover, is on its way to being included in the world classification of the United Nations Educational, Scientific and Cultural Organization (UNESCO) as a biosphere reserve thanks to its marine and terrestrial biodiversity.