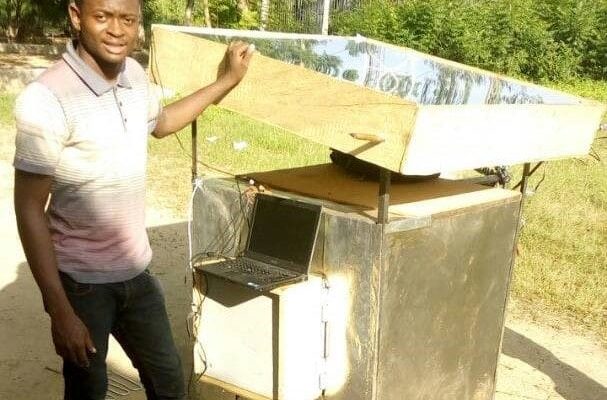 Following the national final of the EDF Pulse Africa Tour, held in Yaoundé on October 3, 2019, the proponent of the Photothermic Solar Fridge was chosen to be the lead carrier for Cameroon at the international final of the competition to be held in Paris, France, in November this year. Triumphant Chulang distinguished himself among the eleven other candidates in the competition.

He has made history with EDF Pulse Africa in Cameroon. From now on, Triomphant Tchulang will be known by all as the very first champion of the Cameroonian final of the EDF Pulse Africa Tour. His photothermal solar refrigerator caught the attention of the entire jury. This victory automatically designates him as the representative of Cameroon at the grand final scheduled to take place in Paris on November 21, 2019. Cameroon’s choice to host one of the finals of EDF Pulse Africa is a way for the organisers of the competition to encourage local entrepreneurship. The national final held in Cameroon on the 3rd of October 2019 put 11 project leaders in the following three categories into competition: off-grid electricity production, electricity use and service production and finally, access to water.

The photothermal solar refrigerator works thanks to a combined use of solar energy, thermal and light in particular. During the day, it stores energy and in the evening, it provides additional energy to recharge other devices, such as mobile phones. The solar refrigerator is advantageous in that it allows food to be stored at a lower cost and facilitates access to pharmaceutical products in remote areas (some products are rare in these areas because of frequent electricity outages that compromise their conservation).

Teachmepad is a solar educational tablet made from recycled wood and has an integrated solar charging system and a hybrid mobile charger, which its designer called Powger. The last innovation presented on the podium was Agropad. Designed by the start-up Global Energy solution, Agropad is an intelligent, remote-controlled irrigation system that takes into account external parameters such as rainfall and humidity levels. The system is powered by solar energy. This solution makes it possible to compensate for water scarcity and the decline in agricultural productivity; events that have become recurrent due to climate change. These two projects ranked 2nd and 3rd respectively in the final ranking of the competition.

Triumphant Tchulang has just joined the arena of Cameroonian champions of the EDF Pulse Africa challenge, made up of Fabien Kouatcha, winner of the Coup de Coeur award at the 2018 edition with his Save Our Agriculture project and the start-up Eduair, which won the third prize in the final in 2017. Now, the question is will Triumphant triumph in Paris next November? It will be known when it is time…