Homepage » CAMEROON: Greenpeace report condemns deforestation in the south of the country

CAMEROON: Greenpeace report condemns deforestation in the south of the country 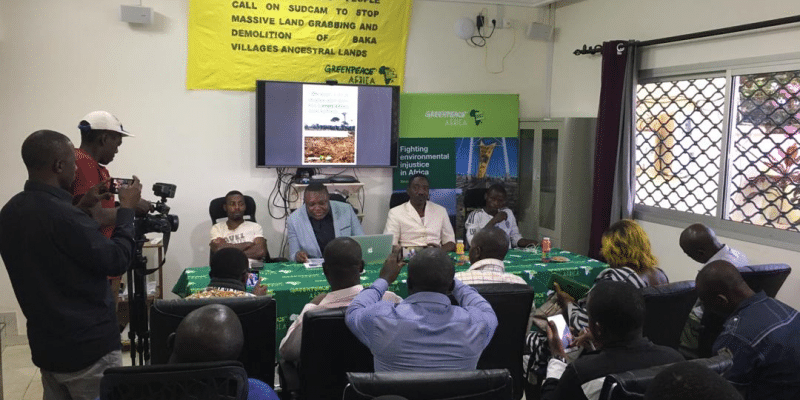 Greenpeace Africa released a report on the activities of Sudcam, a rubber production company in the southern region of Cameroon, on November 25, 2019. The report reveals that the presence of this company has led to the destruction of a forest area the size of which would be equal to that of the city of Paris.

“We have been asked not to go into the forest again”, it is this statement made by a Baka native (southern Cameroon) that Green Peace has chosen as the gateway to the report it has recently made public. The 20-page document highlights the deforestation and human rights violations caused by Sudcam’s arrival in southern Cameroon. Sudcam is a subsidiary of the rubber giant Halcyon Agri, based in Singapore. The survey was conducted in three Baka villages in southern Cameroon, including Bitye, Edjom and Nyabibete.

According to data provided by Greenpeace, Sudcam has devastated a forest the size of which would be equal to the city of Paris (more than 100 km2, editor’s note), and this in only 7 years (2011-2018). In addition, the NGO points out that the volume of carbon dioxide emitted by deforestation corresponds to the volume of carbon dioxide that can be emitted by 60,000 cars of burnt coal. The survey also highlights the fact that deforestation in this area is contributing to the loss of some species, but also intensifying poaching, as indigenous populations that were previously used as forest rangers have been driven out of their natural habitat.

The survey was carried out in collaboration with a local NGO, the organisation Supporting the Empowerment and Integration of Women, Youth and the Unemployed (Apifed). The two structures conducted surveys in three Baka villages (Bitye, Edjom and Nyabibete).

Recognize the rights of indigenous peoples to save the forest

The Greenpeace Africa report also makes recommendations to the various stakeholders. Concerning Sudcam, for example, the organisation is calling for the restoration of destroyed forest areas and the return of remaining forest areas to local communities. With regard to the various donors, in particular those who are members of the Central African Forest Initiative (CAFI), Greenpeace called for the allocation of funds to support the transition to local community forest management in all countries in the Congo Basin. Finally, Greenpeace is asking the Cameroonian government, among other things, for legal recognition of Baka nationals and their leaders. For Victorine Che Thöner, “recognising the rights of forest populations is the best solution to preserve the forest and counter climate change as well as the threats of extinction of certain species”.

Sudcam is 80% owned by the Cameroon Rubber Development Corporation (SDCC), which has been owned by Halcyon Agri since 2016. The remaining 20% is held by the Palm and Rubber Production Company (SPPH), a private Cameroonian company.