BENIN: Fénix and Canal + team up to provide solar-powered television 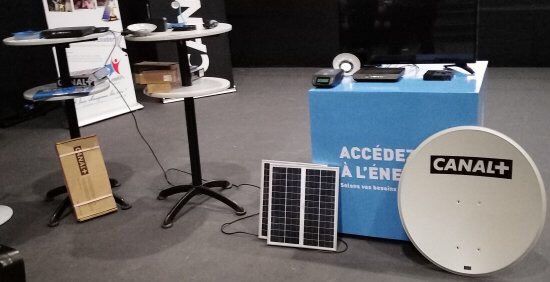 Fénix Benin, a subsidiary of Fénix international, a supplier of domestic solar systems, has just signed a partnership with Canal+ Benin, a subsidiary of the French group Canal +, specialised in the distribution of pay-tv channels. The two companies will distribute solar home kits accompanied by decoders, Canal+ satellite dishes and a "special package".

The partnership will enable the two companies to distribute solar home systems accompanied by Canal+ decoders and satellite dishes. The agreement will also enable the populations of this West African country to benefit from a one-year subscription to a Canal+ “special package” of 120 TV and radio channels. This is a new challenge for the Engie Fénix Benin Company created in November 2018. The group has already provided more than 70,000 Beninese households with access to electricity.

It is the “Fénix Power TV+4″ solar kit, marketed in 2019 by Engie Fénix Bénin, which will be associated with the various products of Canal+ Bénin? The solar system consists of four lamps, two shades, a 125 WH battery, a 24″ or 19” TV + antenna and three solar panels with a combined capacity of 50 W.

According to our colleagues of 24heures au Bénin, the new offer from Engie Fénix Benin and Canal+ Benin costs 360,000 CFA francs (nearly 549 euros). The solar kit distribution company in Benin intends to use pay-as-you-go (pay-per-use) to facilitate the distribution of this new product to households in urban, semi-urban and rural areas. The company also indicates that the offer can be purchased on credit with payment spread over one or two years depending on the means and possibilities of payment of the purchaser.

A few months earlier, in July 2020, the Canal + group signed a similar agreement with the British home solar kit supplier Bboxx.  A partnership that has since enabled the company to associate the television and image decoder of the French company Canal+ with its solar home systems.